“To be, or Noir to be…” A Noir Definition

I believe that there is great value to a list of qualifications I expect in any noir piece. Anything that I review on this site will have to match at least one of the requirements below. Please remember noir can be found in any media, be it art, literature, film, video-games, or comics, it’s there. 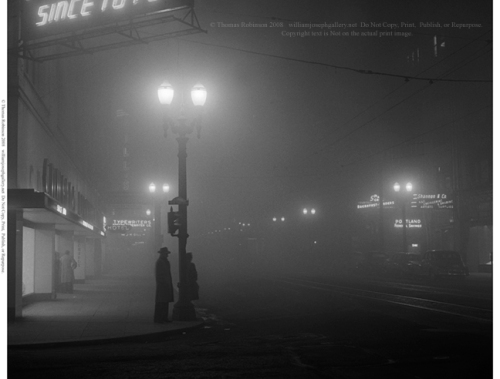 The setting of any great noir piece is the filthy underbelly of the polished public. This place is filthy, grimy, bleak, and often deranged. Expect steaming sewer grates, torrential downpours, second-hand-smoke, and nefarious characters. Crime thrives here, and its perveyors are brutally corrupt and extremely adept. Sadly, these roads are lined with condemned buildings labeled ‘hope,’ ‘faith,’ and ‘charity.’

The main character of the noir genre is at best despicable. We are fascinated with his/her moral ambiguity and glaring flaws while hiding our disgust with the same. Dangling from this character’s lips is the tell-tale cigarette and the greasy tendril of smoke tickles the street lamp above. Usually this character’s life is at stake, and this is almost always due to their own poor choices. We quietly root for him/her and cringe when the baseball bat or crowbar beats their brow bloody.

A secret ingredient that adds spice and variety to any noir is the femme fatale. She is sultry, sexy, and manipulative. Her power over the main character is unmistakable and she gently leads him along to meet her own ends. Elegance of speech and brutal double crossings as common as lipstick stains on wine glasses and discarded lingerie. She is deadly, untrustworthy, and 9 times out of 10 the villain.

Each of these three items are hallmarks of the noir genre. I will use these criteria as pegs to hang my reviews on, and as indicators of proximity to the noirWHALE (the ‘big-one’ so to speak). As the media I encounter exhibits these traits, I will detail their strengths and weaknesses on this site. I am sure that there are other hallmarks of noir out there, and as I discover them I will add to the list. 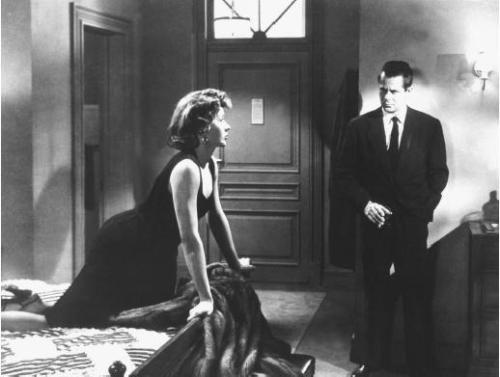 "turn your breasts to the light dear."

Throughout the genre of noir, there seems to be a fairly steady stream of misogyny. I’m not suggesting that this “dame-hating” is always aware of itself or that it’s a conscious decision by the noir creators, but it rears itself very consistently in each piece. Women are the villains, the burdens, and the childish fools that merely tolerated by the hero. Also the women are always “male-defined.” Their behaviors, attitudes, and appearance are constantly pandering to a male audience. I assume that this must be incredibly frustrating for female audiences (it frustrates me and I’m a male). As a result of these male definitions, noir seems to always focus on beautiful women with low sexual standards and no depth of character (other than where it serves plot). Recently I’ve read that there are some female authors who have reversed the roles in modern noir novels. I hope to read some of them soon  so I can report back my findings. 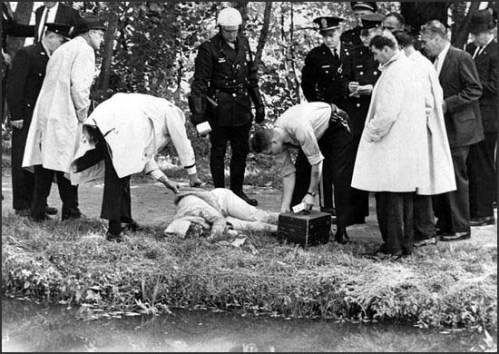 This may be an actual crime scene...

Another theme that has presented itself in my studies is that of redemption. In noir, the detective always arrives after the tragedy has taken place. He is plunged into a world of chaos, where something whole was just shattered (murder, rape, violence, etc.). His job is completely consumed with trying to redeem the unredeemable. Think Batman. Bruce Wayne is haunted by the murder of his parents. He decides to seek vengeance for the rest of his life by “righting” all the wrongs in Gotham. The only catch is that his task is impossible. He cannot change the fact that his parents are dead, nor can he completely succeed in purifying Gotham. He can’ t win. The only measure of success he achieves is through putting as many pieces back together as he can. In this way we (the audience) are lead to believe that something has actually been redeemed. We feel better about the injustice when we know how or why it happened, even though it still occurred. Dean DeFino calls this “illusions of order” and “intellectual control.” He says that “the story redeems that sense of order and control by (fictionally) exposing its logic, its cause-and-effect chain, how one thing leads to another.”

I have always wanted to create a very robust noir definition for noir in all of its forms. Thus far I have previously set forth 5 unique elements that are found in any noir media. They are: The seedy underworld, the ant-hero, the femme fatale, misogyny, and redemption. Recently I have thought of two more that must be added: Loss of Innocence, and Eroticism.

giving us the reasons why

This aspect of noir is the one that hits us in the gut. It wrenches our emotions and makes us uncomfortable. Torture, rape, sin, and abuse all fall under this thematic umbrella. Usually, the loss of innocence within any noir piece holds the responsibility of answering the question “why?”, as in: “why is this character this way?” or “why do they do what they do?” This is closely related with the Redemption aspect of noir because usually the loss of innocence is what causes the need for redeeming.

eroticism in the 80's

One thematic element of noir that has caused the most controversy in the genre is that of eroticism or sexuality. These tend to not be the main stream accepted types of sexual behavior, instead they are the outré and bizarre fetishes that make us cringe. Prostitution, adultery, sadomasochism, and other unmentionables are the mainstay of noir. Most often, lust plays a huge roll in any noir crime fiction as well as lack of self control. Those characters that can control their sexual desires are those that are the most successful, while those who succumb are the victims of their own self destruction. This is closely related with the theme of Misogyny in our noir definition, especially as it pertains to the portayal of the femme fatale.

Well, I hope that we can continue to add to our noir definition in the future! Please email me if you think of any aspect that needs to be addressed! Chad.deLisle[at]gmail.com

One aspect of the noir genre that has recently leapt out at me is the heavy-handed theme of racism. Condescending language, disparaging remarks, and sexual abuse are all hallmarks of Racism. This racism may be a byproduct of the era in which the noir genre was birthed, but it certainly thrives in the contemporary time period as well. Understand that the racism in film noir, noir crime fiction, and noir comics is not only directed at Blacks; others feel the sting as well. I believe this theme rests entirely upon power, control, and illusions of power. The white male desires to remain in control, so he inflicts emasculating and denigrating roles upon white females, blacks, and any other race or people he considers inferior. In this way power threatening groups are robbed of their ability to affront the acceptable order established by he and his cohorts. What do the white females, blacks, and other races do in response? They mimic the abuse inflicted upon them by white males and perpetrate heinous crimes against one another. And thus the only way they can obtain power is by accepting roles and behaviors that are white male defined.

This last week it was brought to my attention that there was a problem with my noir definition. A frequent visitor to NoirWhale.com pointed out that I had misappropriated the term “blaxploitation.” After some research and review I concurred with his analysis. Blaxploitation actually refers to a process of stereotypical media that was meant to appeal to black, not offend them.  I had been using it as a term synonomous with racism, and while it has a racist element, they aren’t the same thing.

Thus I append the noir definition; instead of removing the element altogether, I’m renaming it “racism” because that is what I truly meant in the first place. It should be noted that blaxploitation can be found touching several areas of the noir genre, it’s just not as frequent a theme as racism. So moving forward, I’ll still be pointing out the generally racist nature of much of the genre, I’ll just be using the proper term for it.  Thanks Justin!

Anyone who has seen an episode of Mad Men will understand why “smoke” must be added to my noir definition. Curling tendrils of cigarette smoke portend sexual encounters in seedy hotels, cruel seduction, and infidelities. Profanity and profundity crosshatch the hanging smoky-mirk in scene after scene of film noir, noir crime fiction, and noir comics. Smoke caresses the lips of the femme fatale, stings the eyes of the innocent, and tickles the throat of the stooge. It stains the teeth, fingernails, and wallpaper of the anti-hero, yet entombs him like a viking king on a floating pyre. Disgusting in real life? Yes. Amazingly enticing in noir? Yes. I know this seems obvious, but in hindsight “smoke” should have been the first quality that defines the noir genre.

As with my other noir definition updates, I’m sure there are more to come… 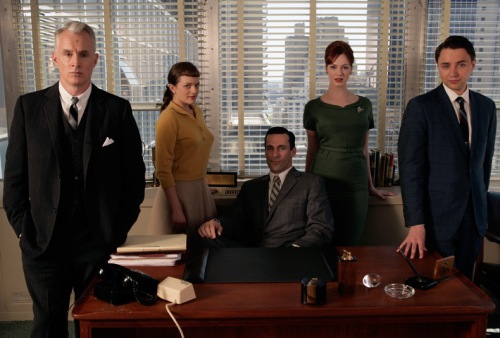 Only recently apparent to me is the frequent theme of emasculation in the noir genre. Emasculation in noir refers to robbing a male of his “manliness” in some degree; either through humiliation or through some means of impotence. Examples: A man can’t provide for his family, he’s beaten or humiliated by some thugs, he loses his livelihood, he can’t land the femme fatale, his health fails, or he literally has his “manhood” taken away (read Sin City: That Yellow Bastard). Often the driving theme of a noir piece is the fear of emasculation, even if it hasn’t occurred yet. In Night and The City, Harry Fabian becomes more and more desperate as he becomes more and more emasculated by his failures to succeed.

If you’re still failing to grasp what I’m referring to, look at Mad Men for example; Don Draper, Pete Campbell, Roger Sterling, and others each have a certain masculine ideal which they subscribe to. For Pete it’s success in the workplace without the aid of others, for Don it’s strength and privacy, for Roger it’s health and sexual conquest, for others it’s something else. Although each man may have a slightly different definition of masculinity, ALL of them fear its loss and panic when it’s endangered. Pete’s marriage suffers when he fails at work, when Don’s secret past rears itself he attempts to flee, and as Roger’s health plummets he weeps like a child; each of them are emasculated by their greatest fears. Thus our noir definition is expanded.

Got any ideas for the noir definition? email me: chad.delisle [at] gmail.com