Noir, Misogyny, and The Maltese Falcon

“You won’t need much of anybody’s help. You’re good. You’re very good. It’s chiefly your eyes, I think, and that throb you get in your voice when you say things like ‘Be generous, Mr. Spade.'”

Me with possibly the greatest noir crime fiction book in existence...

Look at any list of “top noir novels” or “best crime fiction books” and The Maltese Falcon by Dashiell Hammett is invariably near the top. The novel was first published in 1930 and stands as a bastion of the ‘hard-boiled’ vintage crime stories. Although the plot is quite remarkable, I am not interested in providing you with a rote summary of the events that take place in the novel. If you really want one, you can get one here.

Instead I feel my thoughts drawn to the substance between the plot devices and double-crossings, where one decides if The Maltese Falcon truly stands the test of time. If we hold the novel up to the criteria previously discussed concerning noir, it passes with flying colors. The rough side of pre-WWII San Fransisco is our setting, and our anti-hero is the private-eye Sam Spade. Enter “Miss Wonderly” aka. Brigid O’Shaunessy the femme fatale, and the stage is set perfectly for our noir-ish romp with mystery. I admit I was unprepared when our fourth character made an appearance, misogyny.

Mr. Hammett characterizes Sam Spade as a typical ‘man’s man.’ He is cool, confident, and level headed. Sometimes the reader is privy to his thoughts, but more often than not his mind is an impenetrable fortress. As a result, he is not only mysterious to the supporting actors in the plot, but to the reader as well. He is a shark among men, and a lion among women, and he always takes what’s his. I was prepared for a character who exerts masculine dominance, but not nearly to the extent that Mr. Spade does.

There are three female characters in the novel, and each seemed no better than a plot device or a prop for Sam’s advances. All of his interactions with each woman teeter anxiously on the edge of flirtation and raw sexual lust, a balance as dangerous as it is unlikely. He touches their bodies, plays with their hair, coddles them, scolds them, kisses them (yes each of them), and in the case of Miss O’Shaughnessy beds them powerfully.

The question I ask is why? Why does he treat his female counterparts this way? Throughout the entire novel he seems to grapple with his misogynistic impulses. I would not go so far as to say that he hates women (as misogyny is typically defined), but that he fears and distrusts them so much that it taints his interactions with them. His manly impulses drive his lusty sexual attraction for these women, while his misogyny simultaneously attempts to protect him from them. Here is a perfect scene to illustrate my point:

“I’ve given you all the money I have.” Tears glistened in her white-ringed eyes. Her voice was hoarse, vibrant. “I’ve thrown myself on your mercy, told you that without your help I’m utterly lost. What else is there?” She suddenly moved close to him on the settee and cried angrily: “Can I buy you with my body?”

Their faces were a few inches apart. Spade took her face between his hands and he kissed her mouth roughly and contemptuously. Then he sat back and said: “I’ll think it over.” His face was hard and furious (Hammett 57).

Aside from being one of the most amazing exchanges in all of noir fiction, this is grossly sexist. Sam is furious because he wants her to buy him with her body, but he hates her for it. His response is calculated perfectly to retain his power over her. By telling Brigid that he would “think it over” he kept her offer on the table and placed himself in the position of deciding when or if it will be accepted.  Perhaps he believes if he were to succumb to her offer initially, he would be fully in her thrall and surrender his masculine power to her feminine usurpation. Through this line of thinking, one can almost imagine the femme fatale as a sort of succubus, “a demon in female form” whose entire existence is “to have intercourse with men” (Succubus OED). We can only guess at what Sam Spade is thinking when he denies Brigid’s advances, but it clearly seems tied to the idea of a loss of something other than virtue. My money’s on power.

Another noteworthy interaction occurs between Sam and his personal secretary Effie Perine (the second of three females in the novel). For contextual purposes, they are discussing Iva Archer (the third), the widow of Sam’s dead partner Miles. Sam is sitting at his desk resting his head against the hip of Effie, who stands at his side:

“Are you going to marry Iva?” she asked, looking down at his pale brown hair.

“Don’t be silly,” he muttered. The unlit cigarette bobbed up and down with the movement of his lips.

“She doesn’t think it’s silly. Why should she–the way you’ve played around with her?”

He sighed and said: “I wish to Christ I’d never seen her.”

“Maybe you do now.” A trace of spitefulness came into the girl’s voice. “But there was a time.”

“I never know what to do or say to women except that way,” he grumbled, “and then I didn’t like Miles.”

Spade rubbed his face impatiently against her hip, but said nothing (Hammett 27). 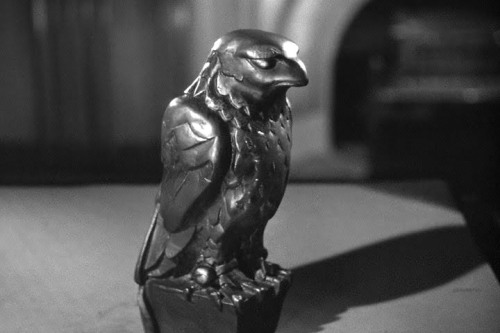 Effie begins by trying to ascertain Sam’s intentions with Iva. She has obviously seen some signs of a serious relationship between them, yet Sam dismisses all of it as “silly.” The reader gets the subtext that Effie herself is interested in Sam (why else would she be asking?), and then it becomes more apparent when she calls Iva a “louse” and says she’s jealous of her figure. Perhaps she believes that if she looked like Iva she could demand Sam’s affection, instead of being firmly caught in the role of confidant. You will note that Sam admits that he doesn’t know how to deal with women except in “that way,” which is the way that plays their feelings and teeters between flirting and disgust. The more you examine this passage the sadder it becomes, because you can feel the pain that Sam is inflicting on Ms. Perine when he nuzzles his face against her hip. Basically, he is confirming his desire to “play” with her when he wants while remaining un-entangled romantically. She means nothing to him.

The last scene that cannot escape mentioning occurs near the end of the novel. Sam is led to believe that Brigid has stolen a 100 dollar bill. He takes her into a bathroom at gunpoint and they share this interaction:

In the bathroom Brigid O’Shaughnessy found words. She put her hands up flat on Spade’s chest and her face up close to his and whispered: “I did not take that bill, Sam.”

“No. Take your clothes off.”

“All right. We’ll go back to the other room and I’ll have them taken off.”

She stepped back with a hand to her mouth. Her eyes were round and horrified. “You would?” she asked through her fingers.

“I will,” he said. “I’ve got to know what happened to that bill and I’m not going to be held up by anybody’s maidenly modesty.”

“Oh, it isn’t that.” She came close to him and put her hands on his chest again. “I’m not ashamed to be naked before you, but–can’t you see?–not like this. Can’t you see that if you make me you’ll–you’ll be killing something?”

He did not raise his voice. “I don’t know anything about that. I’ve got to know what happened to the bill. Take them off” (Hammett 196).

One of the vintage covers of The Maltese Falcon

The bathroom search scene is the most degrading and misogynistic in the novel. Dashiell does not go into perverse detail, as if Brigid were performing some kind of strip tease, but the cold manner in which Spade deals with her is shocking. Keep in mind that this is AFTER they have slept together (possibly more than once, I don’t recall exactly). Once again we can see that the woman in the scene has misinterpreted Sam’s behavior. She thought that her relationship meant something to him, and he assures her that it does not. Just like the scene with Effie, the more we dwell on what is happening here, the more painful it becomes. For Sam really is “killing something,” he is killing the part of Brigid that loves him, and killing the part of himself that she loved. This murder scene (for that is truly what it is) hinges upon Sam being unable to sacrifice his power or knowledge through trust. He is tortured by the idea of not knowing, and having to place his trust in another human being, especially a female. In order for him to retain his power (which is in knowledge), he must force her to strip so that he can know with a certainty that she does not have the bill.

The problem with this novel (and possibly all noir) is that all of the women are viewed through this patriarchal, misogynist lens, and thus they act out the roles that a male author and audience require of them, not necessarily the roles they would actually play. Johanna M. Smith defined it this way: “texts by [Dashielle Hammett] subscribe to a gender-based, individualist ideology in which women are male-defined” (Smith 80). Stephen Cooper, in his article “Sex/Knowledge/Power in the Detective Genre,” said that “Spade is the genre’s ideological model of male self-containment. [Female figures] function primarily as sexual foils to the detective, [and] also as initial obstacles to and ultimate resources for the detective’s inquisitive/acquisitive will-to-know. Notwithstanding the high profile given to “romantic interests” by the genre, such service suggests the exploitable continuum between, on the one hand, sex and knowledge, and, on the other, knowledge and power” (Cooper 23-24). The point is, all of the power both in sex and in knowledge rests in Sam Spade. The females are expendable victims of his occupation, both detective and male. For in the noir world Mr. Hammett created, Sam must either victimize them or he himself will become the victim of robbed masculinity and power.

I hope you don’t mistake my negative criticism of misogyny as a reflection of my perspective on this novel. Truth be told, I loved this book and will likely read it again and again. I simply find extreme fascination in the gender issues that are taking place in its pages. From a critical point of view, The Maltese Falcon absolutely stands the test of time because many of the issues explored are still being experienced contemporarily. The argument is whether or not Dashiell Hammett intended social criticism or if his work was merely a product of the age in which he wrote. Although I admire his deft hand as a writer, I am leaning toward the latter belief.

my copy of the text was purchased from amazon.com

3 responses to “Noir, Misogyny, and The Maltese Falcon”