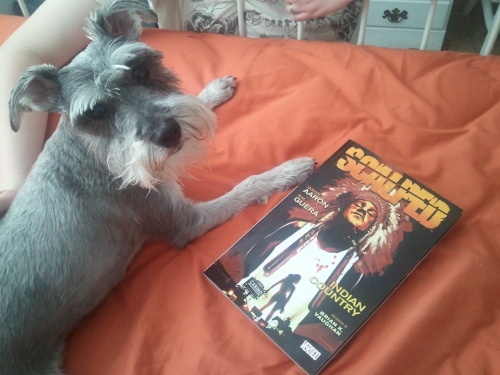 Scalped: Indian Country is the very first trade paper back of the Scalped series. I picked it up because a good friend of mine recommended it while we were on a road-trip to Emerald City Comic Con in Seattle, Washington (If you want pics of that trip, check out my Facebook account). Knowing my penchant for noir, his exact words were: “Its like The Sopranos on an Indian Reservation.” Simply stated, I was extremely pleased with the story, and I rank it with my very favorite noir comics. I feel that the easiest way to break down this review would be to hold Scalped: Indian Country up to the noir definition that we have already created.

The Prairie Rose Indian Reservation is the setting for this noir comic. Litter-strewn highways, trailer park junkyards, feral dogs, and a brand new shining casino provide the backdrop for the characters. One of the very best depictions of a villainous underworld I have ever seen. If you can read this and not be wracked with “white-man’s guilt” then you are either don’t have a heart or you aren’t white. The art is so filthy in this noir that you will feel filthy touching it.

Dashiell Bad-Horse is about as hardened as they come. He grew up on the Prairie Rose when he was young, and he left (or escaped) as soon as he could drive. He joined the army, fought in Iraq, came back and joined the FBI, then found himself in prison. He is more crooked and brutal than any detective novel anti-hero I have ever read. And he uses nunchucks. Totally a tragic bad a** anti-hero, but you can’t help but root for him.

“…SCALPED is Jason’s distinctly American Western-slash-crime story about the people who had this country first. Starring Dashiell Bad Horse, the rare film noir protagonist who’s actually as cool as his name, this is the riveting tale of one mean cop with a big damn secret.”  -Brian K. Vaughan

Dashiell’s ex-girlfriend Carol is the femme fatale of this noir comic. She is also the biggest slut on the reservation (in addition to being Chief Red-Crow’s daughter). You may have already guessed some of the problems this relation would cause. Well, Dashiell comes home to the Prairie Rose, working secretly for the bureau on a deal that got him out of prison, and it doesn’t take long for Carol to become the manipulative seductress that any great noir needs. 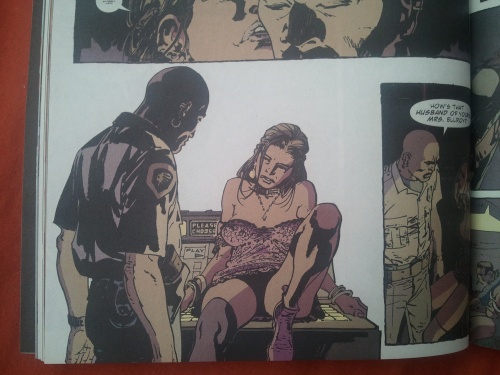 Jason Aaron is the author of this noir comic, and he has got the misogyny down to a science. There are only two female main characters in the story, Gina Bad-Horse (Dash’s mom) and Carol Red-Crow the slutty femme fatale (the rest are strippers, old women, and prostitutes). SPOILER* And one of them is scalped by the end of the first trade paperback *SPOILER . One of the greatest scenes characterizing this misogyny is towards the end of the trade when Carol provokes Dash into angry, sleezy, aggressive sex. It seems that in this story a woman’s only value is her ability to wield sex as a weapon (and with all the sleeping around Carol does, she has definitely honed hers).

Possibly the greatest theme in this entire noir comic is that of redemption. Redemption not only of Dashiell Bad-Horse but of each individual living on the Prairie Rose Indian Reservation, and redemption of the men that put them there. Can men redeem the wrongs caused by the misdeeds of their forefathers? Can Dash be redeemed for walking out on his family and Indian heritage? Can Chief Red-Crow redeem his people through taking money from the white-man? Each of these questions and more are asked by this excellent author/artist team. Also, if you recall the noir definition, “illusions of order” and “intellectual control” rear their heads in this tale as well. These themes are most prominent as Dash uncovers his mother’s past bit by bit. The revelations are astounding as they unfold, and easily entice  me into the next trade paperback.

Jason Aaron & R.M. Guera have made me an instant fan of Scalped, the most compelling noir comics series to hit us in quite some time. (I purchased my copy at ECCC ’11. )

Me enjoying an excellent noir comic

2 responses to ““Noir On the Reservation” Scalped: Indian Country”