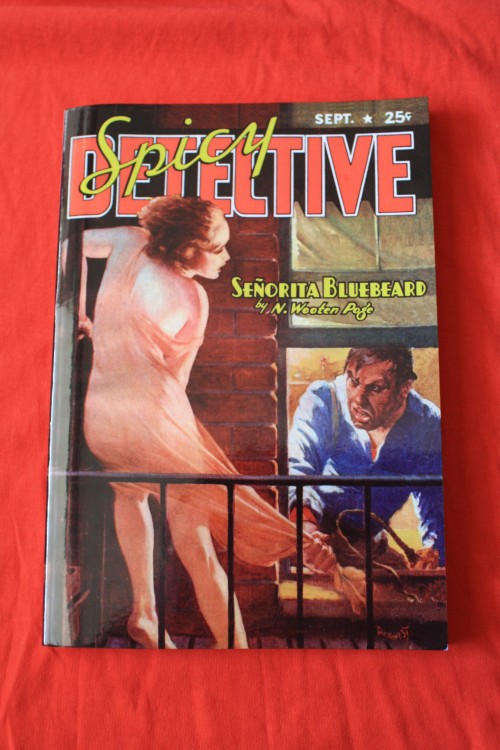 If you look closely, That man is holding a whip and wearing white clown lipstick...terrifying.

In the September 1938 issue of the pulp magazine Spicy Detective, N. Wooten Poge’s sleazy noir crime fiction/whodunit “Senorita Bluebeard” debuted. I purchased this issue out of pure curiosity, mostly because I wanted a replica of the pulps that were so popular in the early part of the last century and because I wanted to read some lesser known authors. Now I can say with authority that there is a reason that they are “lesser known.” Tame by today’s standards, this sleaze rag pulp is merely masquerading as noir crime fiction while it attempts to satisfy the lusty eagerness of its readership.

The Title Page of "Senorita Bluebeard"- love that he is tearing her dress off as he's falling.

Billie Carter is the anti-hero character, a man who is a self proclaimed “playboy” and self-congratulating puke. A “yellow” journalist by day and a womanizer by night, he says that he would have made a great policeman if he could have stomached the idea. The plot of “Senorita Bluebeard” hinges on the disappearance of 8 of Billie’s pals (all of like mind and status mind you), and he feels that if anyone can solve the case, its himself. His best friend and fellow hound-dog John Logeron was the last of the 8 men to disappear, and as a result Billie believes that he has an inside scoop that the police would never imagine. 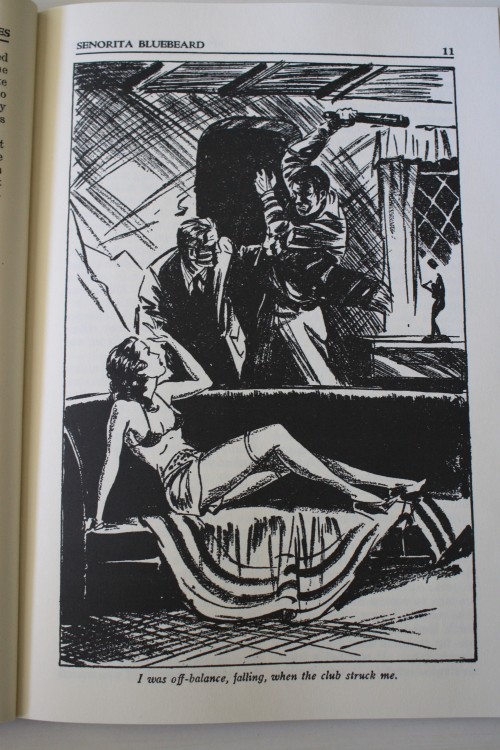 Mr. Carter explains that his buddy John would always brand the women he claimed with a cigarette in a special location on their upper thigh. Seeing that each of the 8 men that had disappeared were all successful playboys, Billie believes that the culprit had to be a woman. Additionally, now that John Logeron had disappeared she would have to have been branded (for how could a man not succeed with a woman?= noir misogyny). Mr. Carter knows that all he must do to locate the femme fatale killer is seduce as many local women as possible and keep an eye out for a fresh cigarette burn. The remainder of the story is Billie Carter using himself as bait and undressing all of the women who fall for his sexual advances. The only crime in this noir crime fiction is the plot.

You see, I knew John Logeron pretty well… and all his cute little tricks. Trust us caballeros for that! This Logeron had a crazy streak in him, and he bragged that he always branded his women–with a cigarette burn on their legs! Not a bad burn; and not pretty, I’ll admit, but it gave the old maestro just the sort of clue he loves to run down–or up. If this Spanish senorita was cigarette-branded on the leg, it wouldn’t be hard to crack the case wide open…But first I had to get her to a safe spot. –pg. 10

"I need to choke the sass right out of you!" -Misogyny

“Senorita Bluebeard” was a forgettable piece of early America’s cheap pulp literature. Fraught with an unimaginable plot, various femme fatales in a state of undress, and an irritating chauvinist leading man, this noir crime fiction is a disgrace to the noir genre. The misogyny was so over the top it was nauseating, and the “edginess” of the content was PG at best (Billie never actually has sex with any of the women he seduces). N. Wooten Poge basically created a horny male jedi who would use his mind tricks to shred the paper fragile clothing of the women around him. If this is our noir heritage, we should be ashamed.

For your delight, here is a magazine advertisement from the back of Spicy Detective September 1938: 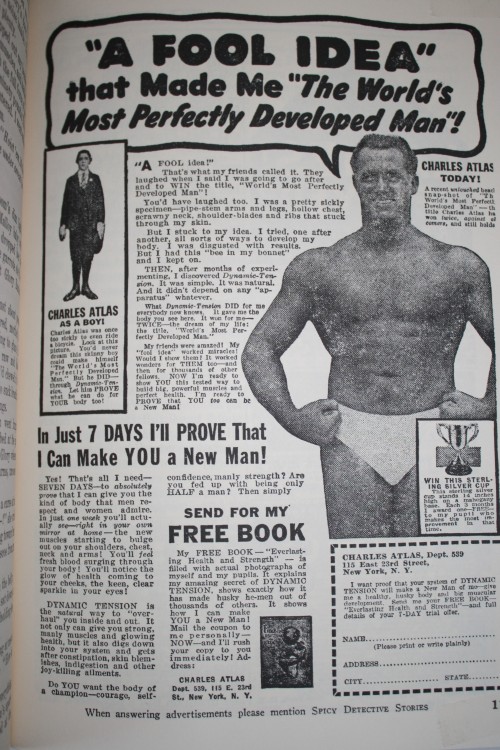