I called it. Detective Cole Phelps, the lovable straight-laced boy-scout who was destroying my noir definition by refusing to be an anti-hero, finally fell to temptation! The L.A. Noire “Vice Desk” chapter was my absolute favorite to date. Detective Phelps new beat is Hollywood, and finally some African American characters make their appearance. The music is dark jazz with a heavy blues influence, and the laid-back tunes perfectly match the rhythm of the unfolding story. My only complaint is that the “Vice Desk” chapter was the shortest so far, being comprised of only three interlinking story arcs:

I really don’t want to write a full synopsis (mostly because I’m feeling lazy), but here is a run-down from wikipedia:

Phelps is then promoted to the Vice Department, also known as Administrative or Ad Vice. He and his new partner Roy Earle, who is himself corrupt, succeed in halting LA’s drug trade, government-issued morphine in particular and bringing down several big time drug dealers, including associates of mobster, Mickey Cohen, an associate of Al Capone. However, Phelps’s past comes back to haunt him when a Marine from his former unit is found shot dead. Phelps then discovers many of his former squad members are being targeted for assassination as well, and after meeting with his old comrade, Jack Kelso, who has now become an insurance claims investigator, Phelps deduces the men who will be assassinated, but unfortunately is unable to save most of them. He slowly uncovers that the U.S.S Coolridge, which transported his platoon home at the end of the war, was also carrying a large supply of surplus morphine. Phelps then comes to the conclusion that the deaths of his old comrades are linked to the ship; and the morphine, realising that the men made a pact to sell the morphine on the street. This caused their assassinations by other drug traffickers, including the mob. Phelps also begins an affair outside of his marriage with a German club singer named Elsa Lichtmann, who Earle constantly berates. Phelps is eventually demoted when Earle discloses his affair as a distraction from the other corrupt activities of several city leaders, including himself. 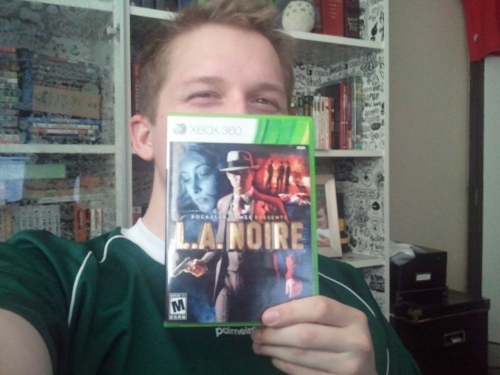 everyone squints in this game, I should add that to my noir definition

The double-cross from Earle was amazing, and I am so pumped to see where it goes from here.  I have a hunch that there is more to the affair with Elsa than meets the eye, because we never actually see any indiscretions other than Phelps entering her apartment on several occasions. We don’t even see him kiss her. And when the “adultery” accusations begin to fly his way, he never denies the affair, but he is never allowed to explain himself. I was wondering when a true femme fatale was going to enter and with Elsa causing the downfall of our anti-hero, finally the stage is set with all the players outlined in our noir definition. L.A. Noire is shaping up to be a most incredible video game noir.