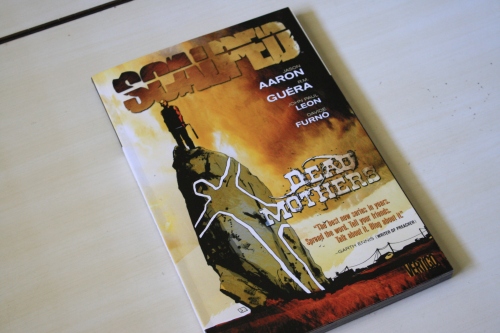 The third installment of the Scalped series was as powerful and heart-pounding as the rest. Jason Aaron and R.M. Guéra once again show their deft hand at crafting incredibly emotional noir comics.

The Prairie Rose reservation becomes the scene of two murders: One, a junkie found strangled, leaving behind a handful of orphans with more similarities to Dashiell then he’d care to admit. The other is Dash’s own mother, Gina, who has been brutally scalped and slaughtered.

Dash tells the orphans their mother has been murdered.

“…gritty and honest, it’s a new type of noir and the best word to describe… [SCALPED]…is brilliant.” – Crimespree Magazine

The real beauty of this volume of Scalped is how the plot weaves the psychological torment of an estranged son craving redemption (estranged not only from his mother Gina but from his people). J. Aaron and R.M. Guéra are so incredible at speaking volumes without saying anything at all. Poignant emotions hang just beyond our reach as Dashiell and others act out in destructive ways and attempt to cope in unhealthy ways. Noir comics like these are one in a million.

My favorite scene occurs near the end of Dead Mothers, so brace yourselves for spoilers. [SPOILER] Dashiell goes to a bar to drink himself into oblivion, and he purposely picks a fight with a huge group of locals. They drag him outside and beat him to a pulp, and then he wanders off in a drunken stupor down the highway. Cars swerve to miss him as he walks down the middle of the road and mutters obscenities to himself. After several hours, he collapses. Crawling in confusion, he finally stops to gather his bearings and realizes that he has walked to his mother’s house. Her front porch is covered in flowers from friends and mourners, and the most prominent wreath reads “We Miss You Gina.” Dash sits motionless for many long moments, and then violently weeps. The scene ends as he stands up and walks inside, finally home. [SPOILER] 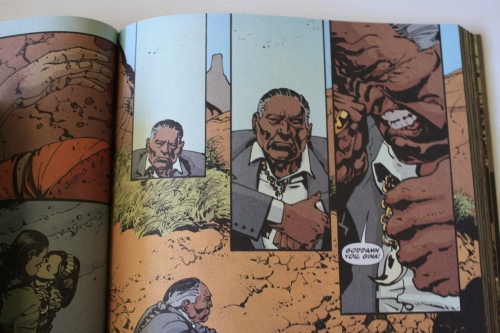 After this moment in the comic, I finally realized that the central theme of the entire story is Dash’s journey home. His journey to redeem himself and reconcile with his mother and his people. He’s lost the chance to make things right with his mother… will he lose the chance with his people as well?

"You are on Indian Land."