I need one of these suits.

Okay. I know that I am outrageously behind the times, but I had never seen Quentin Tarantino’s film noir debut Reservoir Dogs until yesterday. Like many of the Tarantino films I have seen before, Reservoir Dogs is laden with profanity and gratuitous violence. BUT, as far as innovation in the crime/ film noir genre, this film may be without equal (that is until Pulp Fiction arrives on the scene two years later). The director’s storytelling style is very heavy on flashback sequences (which for some reason feels very Anime, you may or may not know what I mean), and he unravels the plot a single thread at a time. I’ve found that this method keeps the audience hanging on every line, because so much focus is needed to keep the story straight. So you will either applaud it as a masterpiece, or you weren’t able to follow the plot. 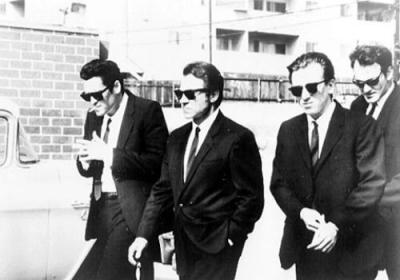 The cast is packed with heavy hitters, and the acting was a perfect balance of over-the-top drama and natural rhythm. Harvey Keitel (Mr. White), Tim Roth (Mr. Orange), Steve Buscemi (Mr. Pink), Chris Penn, and Michael Madsen make up the “core” cast of actors. But the real star of the film is the dialogue. Tarantino delivers a sarcastic wit that is unmatched in the film noir genre, truly remarkable. From the first scene to the last I was riveted by the unfolding personalities portrayed through dialogue. 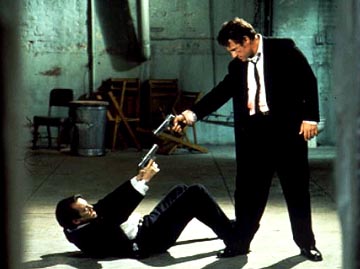 Here is how it looks next to our noir definition:

A low-lit diner in the beginning, and an abandoned warehouse for the remainder of the film noir.

Mr. Blonde: Hey Joe, you want me to shoot this guy?
Mr. White: [laughs] Shit… You shoot me in a dream, you better wake up and apologize.

I really had to do some thinking on this one, I would have to say it was Mr. Orange. He was the undercover cop and the unfortunate victim of a painful gunshot wound to the belly. He was the only “good guy” in the film, but he was far from perfect.

Wha? none to speak of. I guess if we were really analyzing we could say that the diamonds were actually the femme fatale.

Lots of crude dialogue about women, but no female characters present to be offended.

Mr. Brown: Let me tell you what ‘Like a Virgin’ is about. It’s all about a girl who digs a guy with a big dick. The entire song. It’s a metaphor for big dicks.

One of the main driving themes to the film is redemption. These crooks are trying to redeem their failed “job” by trying to sniff out the rat in their group that tipped off the cops.

Mr. Pink: Somebody’s shoved a red-hot poker up our ass, and I want to know whose name is on the handle!

a cop in the trunk

No sex or nudity, but there is a torture scene where Mr. Blonde cuts a cop’s ear off. The way it is portrayed, it’s easy to construe a sexual connotation from Mr. Blonde’s reaction: “Was it good for you too?”

Mr. Orange shoots and kills a civilian while undercover. The look on his face says it all. Innocence right out the window.

I really enjoyed this film noir.