Those who are closest to me know that I have an unhealthy obsession with Metal Gear Solid. I would like to stress the fact that I am NOT writing this video game noir review of Metal Gear Solid 3 simply because of this obsession….but it may have something to do with it. As always, I will closely examine the most “noir” aspects of this game against the noir definition we have made. Then you can tell me whether it’s noir or not (and whether or not I’m just a crazy MGS fanboy run a muck). Now, the story-line of this video game noir is as convoluted and varied as they come, and I have NO interest in attempting to “synopsize” it . If you would like a run-down of the plot, please visit the Metal Gear Solid Wiki.

The early 1960’s : The thick jungle of Southern U.S.S.R. – overgrowth laden warehouses, snake infested caves, jungle huts, mountain top bases, and sprawling military compounds. Sometimes behind a waterfall, sometimes in a sewer, the backdrops are creative and alluring from beginning to end.

Naked Snake, a special forces operative that would later go on to win the title “Big Boss” is the anti-hero of this video game noir. His origin (acknowledged or not) is firmly rooted in the detective novels of the 1930s and 1940s. He is forever caught in a struggle to exert his masculinity and dominance in a world that endlessly contests it. While his outward actions are confident, cool, and calculated; inwardly he is insecure, sensitive, and emotionally wounded. These issues are classic masculine struggles in any noir piece.

This video game noir is unique in that its plot is dominated by the presence of two femme fatales. I cannot decide is this is an attempt by Hideo Kojima to balance the masculine issues of the anti-hero, or if it is an example of the old adage,”two is better than one.” Eva, a sexy undercover double-agent with whom Naked Snake must work with, and Boss, his mentor, rival, and closest ally are the femme fatale pair in the game. Interestingly enough, they are opposite in nearly every way yet they both fit neatly in the noir defined role of femme fatale.

“I bet if I kissed you, you’d taste like a wild beast.” -Eva 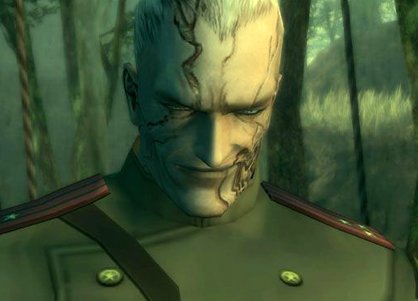 The only character to truly exercise any level of misogyny is Col. Volgin, a Russian separatist commander with lightning powers. He abuses “Tanya” (Eva in disguise) sexually at frequent intervals in the game. The player is never privy to their intercourse, but the scars of his sadism are clearly seen on her fair skin. She asserts that she is merely allowing his behavior in order to keep her cover, but in reality she isn’t strong enough to stop him. He treats her like a mere toy of amusement, and grips her most feminine curves at various intervals in several cinemas.

The central theme of the entire video game noir is redemption. Specifically, the redemption of America. The plot begs the question: what is the price of America’s reputation? 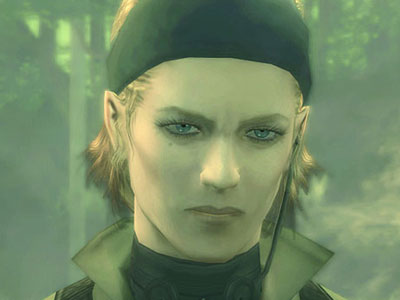 I would say this portion of the noir definition applies directly to Naked Snake. His heart is wrenched as his mentor betrays America, and he learns disgusting truths about the men he serves so selflessly. These revelations literally break him.

2 moments of eroticism worth mentioning: 1) Col. Volgin’s sadist adventures with Eva  (not because they are generally arousing but because they are bizarre and outré) and 2) the ever memorable behind the waterfall campfire scene. Basically Eva attempts to seduce Snake and gets shut down hard.

Well, the only example of blaxploitation in this video game noir is found with the character Sigint. I’m not even black and I was offended by the “over-the-top” Ebonics-style  dialogue. He “jive” talks every time you speak with him, and it gives you the impression that he is an idiot.

Cigars and cigarettes a plenty. If you’re sneakin’ your’e smokin’.

I finally accomplished my dream, connecting Metal Gear Solid with the noir genre. Feel free to burn me at the stake, but I believe the evidence speaks for itself. The HD remake comes out this November. A video game noir that MUST be purchased.