My wife Hilary and I watched the film noir Some Like It Hot a few days ago, and we were incredibly delighted. I know that I will sound like a heretic as I say this, but it was actually the very first Marilyn Monroe film I have ever watched. Go ahead and stone me. But seriously, Some Like It Hot was easily one of the best films that I have enjoyed, and I’m certain that it will hold a place of prominence in my collection forevermore. The movie effortlessly blends light-hearted comedy with heavier noir themes. We were astounded at how hilarious many of the scenes were, and I truly didn’t expect the amount of slapstick present in the script, but underlying it all were serious matters of life and death. The basic premise holds that two musicians were the unfortunate witnesses of a mob killing and decide to escape to Florida disguised as female jazz players. Here’s how it toes the line of noir definition:

A cold New York City winter; a car chase and then white Miami beach sand. The majority of the film noir takes place in a beach side resort.

Tony Curtis (Joe) and Jack Lemmon (Jerry) share the role of anti-hero in Some Like It Hot. Desperate for money, women, and fame, these two goofs really step in it by witnessing a massacre at the hands of the mobster “Spatz.” As marked men, their only chance of survival is to don nylons, make-up, and wigs and head south til it all blows over.

Marilyn Monroe (Sugar Cane Kowalczyk) plays the role of femme fatale. She oozes charisma and a brand of innocent sexuality that is rare in film noir. As a ukulele player/lounge singer, she charms and entertains while cursing the institution of love as she is simultaneously drawn into it. In many aspects, she steals the show. 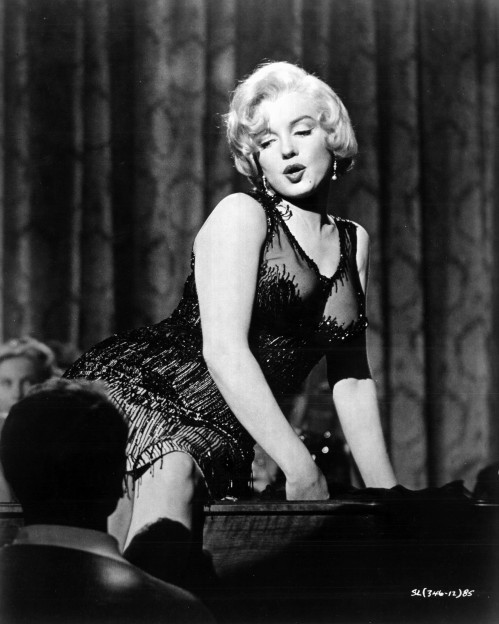 Sugar Cane and the other women are portrayed as very silly and frivolous girls. Even to the last scene Marilyn’s character is helplessly toyed with by Tony Curtis; she is utterly powerless before him (and never catches on to his simple deceptions). A sweet moment of retribution occurs when Jack Lemmon’s character enchants Osgood Fielding III (Joe E. Brown), who decides that “she” would make a fine catch. Jack from then on must constantly swat the amorous advances of a dirty old man in a hilarious twist on noir misogyny.

Several threads of redemption appear in this film noir: Joe attempts to redeem himself after lying to Sugar, he and Jerry both must redeem themselves from the grip of the mob, and Sugar seeks to redeem the institution of love (or herself through its embrace).

The clear loss of innocence occurs when Joe and Jerry witness the gruesome gang execution in the beginning of the film. As helpless bystanders they are tossed in harms way, no longer safe on the side-lines of the mob war.

The love story that develops between Joe and Sugar is composed of scenes that appear quite racy for the time period. Joe pretends to be a millionaire who has lost his libido, and Sugar is issued the challenge of igniting it once again. He claims to have lost the ability to love, and through a series of “test” kisses, puts it to Sugar to heal him. They share a dimly-lit yacht cabin couch and a meal composed of stolen wine and cold pheasant. Quite romantic, and subtle in its touch of eroticism.

The Italian mobsters are reduced to the status of “goombas” and “guidos” in Some Like It Hot. Every Italian-American racial stereotype you can imagine surfaces in the film.

Once again, cigarette smoke seems to be the insidious glue that holds the film together. Tobacco and gin hovers on the breath of every character.

Amazing film noir. It seems to be a bright and comfy launching point into an otherwise dark and dreary genre. Get it on Amazon.com.