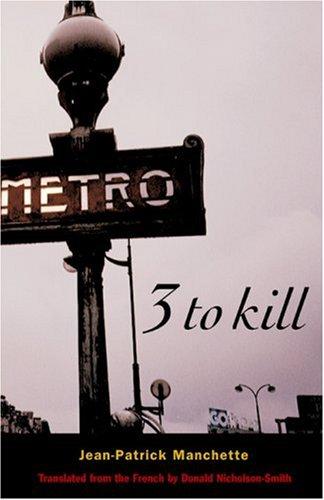 Last week I finished my second taste of Jean-Patrick Manchette’s work, it was the noir crime fiction thriller Three To Kill. The story follows the business man Georges Gerfaut, an upper-middle class family man who finds himself in the wrong place at the wrong time. Late one night as he is driving his Mercedes Benz (slightly buzzed) through Paris, he’s passed by two cars going at a rather rapid and dangerous pace. Several bends down the road he sees one of the cars half-wrapped around the trunk of a tree. He reluctantly pulls his conveyance to the roadside, and finds an old man in the first stages of shock wounded and stumbling from the vehicle. Georges begs the man not to bleed on his leather seats and quickly piles him the back and races to the hospital. By the time they arrive at the emergency room, the old man has passed out, and Mr. Gerfaut begs the triage workers to bring a gurney outside. As they urgently tend the victim of the accident, they hand a clipboard of forms to Georges, and explain that he will need to fill in all of the paperwork for the incapacitated man. Using the bustle of the scene as a distraction, Georges ditches the emergency room and heads home instead. Seconds after he pulled from the curb, two policemen begin asking around the triage station for the man who brought in the gunshot victim. In true noir crime fiction form, what appeared to be a simple car accident was actually a “hired hit” and the fatal wounds to which the old man succumbed were in reality firearm inflicted.

Three To Kill is shamelessly inspired by the most famous lines of Dashiell Hammett’s The Maltese Falcon. It’s what fallingbeam.org calls the “Flitcraft Parable.” Essentially a man named Flitcraft has a close brush with death (A falling beam nearly crushes him), and it shakes him so badly that he abandons his entire life. He leaves those he loves, his job, and every aspect of his old routine. The irony is that a year or two later, he has settled back into the exact same lifestyle. Only now he has a new wife, new job, and new kids. Thus:

So it is with Georges Gerfaut. Shortly after his unintentional meddling in the contract killing, he is nearly killed by two hit men sent to tie off the loose end. He is so rattled that he forsakes his job, his wife, and his children and flees to another part of Europe. For nearly a year he is cut off from anyone who knew him in his former life. Eventually he comes back to Paris seeking the men who sought his death, and slowly he settles back into his old life. His shocked wife welcomes him back tearfully, and he even returns to his old employers. The final scene of the book is EXACTLY the same as the beginning of the first. He is out, late at night, driving his Mercedes Benz with a buzz on.

I found Three To Kill to be a very pleasing dedication to Dashiell Hammett’s work. Its worth was compounded ten-fold when the “Flitcraft Parable” became apparent in its plot. I happily add this noir crime fiction novel to my Jean-Patrick Manchette collection.  (My copy is from Amazon.com)