For a long time I’ve wanted to read some quality female-written noir crime fiction. Because of the misogynistic nature of the noir genre, I’ve been curious as to how that would translate through a woman’s eyes. Queenpin by Megan Abbott is a delightful dance with all of the themes of classic noir, the only difference is the rhythm. 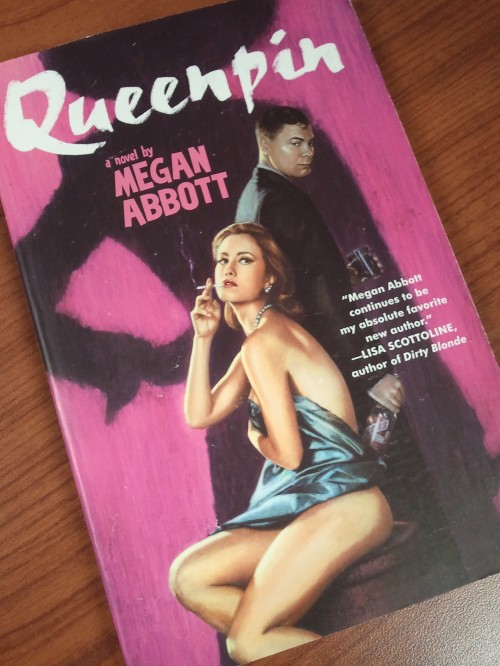 The protagonist is a nameless young woman who becomes the protege of a ruthless femme fatale named Gloria Denton. She learns the inside track of a crime world that has been perpetuated for a generation; more importantly she learns the rules of this world. As she climbs the grimy ladder of the streets, she grapples with desire, ambition, and loyalty. The crux of the plot rests upon a fateful decision that brings her into direct opposition with the woman who made her what she is.

Here is the noir definition rubric:

The seedy underworld of Queenpin is comprised of back-alley betting parlors, gambling dens, casinos, and sunny days at the horse-track. The protagonist makes her mark as a drop girl; she makes evening rounds with money and contraband to the various players and crime-lords on the take. Thus the story see-saws from the glitz of affluence to the banal depravity of dog fighting rings and strip clubs.

Creating a nameless protagonist has an interesting effect on the trajectory of a story. She comes across as being a potential outcome the reader themselves may experience. And even though we never learn her name, we still feel a sense of intimate empathy with her, for her. Coupled with the flawed nature of her character (she has glaring weaknesses), and she makes for an absolutely radiant anti-hero. Because we cringe at her choices while simultaneously understanding why she makes them.

“You have to decide who you are, little girl, she told me once. Once you know that, everyone else will too.”

Vic Riordan, the homme fatale, fills this role in Queenpin. He’s a loser. A washed out gambler who can’t help himself from spending it all on a single throw. Our anti-hero describes him frequently as a wolf, and compares herself to little red riding hood. She knew the second she laid eyes on him that he had her, that she would do anything to him and for him that he wanted. He is the cause of the rift between Gloria and her pupil, because he flies against everything Gloria stands for.

Gloria Denton is one of the most wonderfully portrayed femme fatales that I’ve ever read. She is completely devoid of any self deprecation. Traditionally, a femme fatale is completely male-defined: the fatale becomes what they desire because it grants her power over them. Gloria does no such thing. She embodies power, respect, and the promise of violence. She does not mince her words or flaunt her body, and she ALWAYS does her own wet-work. The reason I mention this in the misogyny section of this review is because she entirely rises above it, and she teaches her pupil how to do so. The very best advice for any femme fatale I’ve ever heard:

There is a strong redemption theme throughout, just like any good noir crime fiction. The anti-hero desires to be loyal to Gloria, and when she fails to do so she desires to repair the damage. The tragedy occurs when she decides that she can’t do so, and she completes the betrayal fully.

I was surprised by the amount of sexuality present in Queenpin. It’s ultimately lust that causes the downfall of the main character, for she cannot stop herself from indulging her appetite for Vic. The details are written tastefully, nothing overtly sexual but the descriptions of the bruises she suffers afterwards.

Queenpin contains an intensely violent murder scene involving a letter opener. I won’t say who is involved, but someone loses a great measure of innocence.

Gloria and her pupil represent powerful women rising up and controlling a man’s world. Their code of conduct and loyalty is cut from years of oppressive experience under the gender-role boot. Although men are intrigued by them sexually, their advances are denied wholesale. The only exception is Vic Riordan, but not even he can escape emasculation. The primary difference between this crime fiction and others is that typically being emasculated is an underlying fear of the main character, in Queenpin this was not so.

I loved reading a noir crime fiction from a female author. The fact that the protagonist’s fall was spurred by a homme fatale was so intriguing. It’s the same successful formula of hundreds of books, just reversed roles.

My only issue with Queenpin was the prose/writing style. It seemed like Megan Abbott was attempting to be Raymond Chandler, but she was trying too hard. The pulpy prose felt forced, and when it feels forced it comes across as hokey and unoriginal.  Just an opinion.