First, let me admit that I deserve no credit for finding this amazing noir comic. I have several friends who are in the business of keeping an eye out for anything noir genre related, and then sending it my way. So, Matt P, thanks buddy.

Victor Santos is a very talented artist who has made a name for himself in the international comics industry. He’s worked with American authors such as Brian Azzarello, Bryan Glass, and Mike Oeming.

“He has won six awards of the Barcelona international comic convention and three in the Madrid con. He also won the Dolmen magazine best artist critics´award.”

Polar is a classically vibrant approach to noir comics. Its minimalistic style and clear cut panels deliver a mood that is at once bleak and riveting. No written script or dialogue exists in the story, and thus crosses all language boundaries. Victor explains his approach,

The main character is Black Kaiser, an international hitman born in the same titled graphic novel, published by Planeta-De-Agostini in Spain and Italy in 2010.”

Does it hold up the noir definition? Here are a few of the most prevalent noir themes:

A lone and secluded cabin folded in blankets of snow is the setting of Polar. A hardened hit squad arrives on the outskirts of the tree line as a strange visitor is deposited at the front door by a snowmobile. Inside, the cabin is warm and dark. The silence of the characters is harmonious with the silence of the snow bound wilderness. The entire color pallet of the setting is black, white, and red (very Frank Miller-esque), and highlights the light and shadow requisite of any good noir setting. It’s magnificent.

Black Kaiser is a ruggedly handsome, eye-patched brute. He’s poised on the edge of violence; always a hairsbreadth from danger.

The strange visitor sheds her coat to reveal a lingerie-clad goddess. She wastes no time putting Black Kaiser to bed. With razor blade hidden in cheek, she is the epitome of the femme fatale archetype: Beautiful, alluring, manipulative, and deadly. 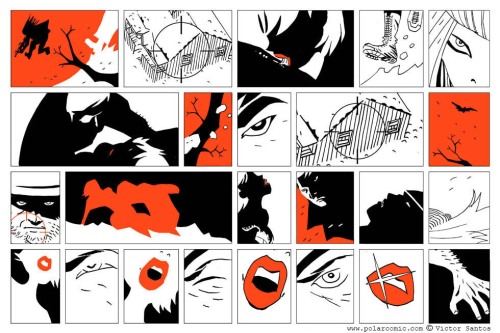 Victor Santos updates this noir comic with new pages every Monday and Thursday. PLEASE head over and support him so he never stops!