Max Payne 3: After the Fall

I don’t think I need to restate how much I love the Max Payne series or Sam Lake, the original series author. A month ago, around the same time I was pre-ordering Max Payne 3 for xbox 360, I learned from a Rockstar Games press release that Dan Houser and Sam Lake would be co-writing a free Max Payne digital comic book. The comic is now available. Here is the link: 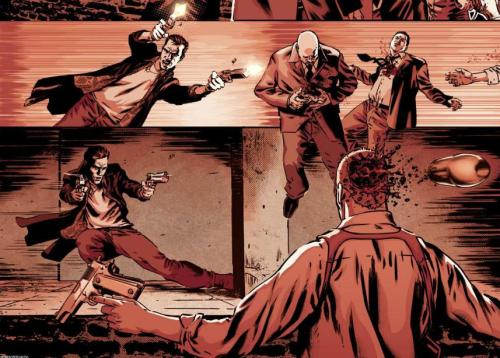 Rather than do a full noir definition run-down on the comic, I’ll just provide my initial impressions based upon the first issue of this ongoing digital project. All the screen caps are my own, and I hope they illustrate the sections of the noir comic that I found most rewarding.

One of the biggest fears I’ve had about the pending release of the Max Payne 3 video game is the lack of Sam Lake on the development team. The first two games drew their noir potency from his ink, and the thought of a Max Payne story without his involvement seemed wrong. This comic set me at ease. The setting is a twisting corridor of torturous flash-backs, like the revelations of a mad man. Max has been through hell, and in “After the Fall” he’s still there, held captive by demons old and new. As you read his dark monologues, you’ll hear the flat baritone of James McCaffrey and you’ll smile. Nothing important has changed, and that’s exactly the way it should be.

The most intriguing aspect of this first issue is the glimpse we are given into the fear-riddled childhood of the anti-hero. We learn that his abusive father was an alcoholic and the cause of his mother’s early death. The story then takes an even more violent turn and suggests that Max may have been his father’s executioner, a taker of vengeance on behalf of his mother. Understanding his childhood, at least in part, adds new depth to the tragedy of his wife and infant’s deaths. For in that depth we can see his fear of becoming his father; his fear of becoming a harmer of loved ones.

The panels are excellent, and are beautiful examples of noir art. The colors are moody and atmospheric, especially during the flashback scenes. I always value the noir comics that can tell more in a panel then they can with dialogue. Max Payne: After the Fall accomplishes this.

Ultimately, we are privy to a Max that is older and even more deranged and damaged than before. He’s swimming in an ocean of addiction, self pity, and violence. He’s a man with a death wish and a guardian devil over his shoulder, and I can’t wait to see what’s next.

**The noir comic is completely free, what are you waiting for? Go get it: