I deeply apologize for being so inconsistent in my noir blogging lately. I’ve started a new job and the demands of a new routine have thrown me a bit off kilter, but I feel confident that I can regain a foothold of regularity and provide some delicious noir nuggets. 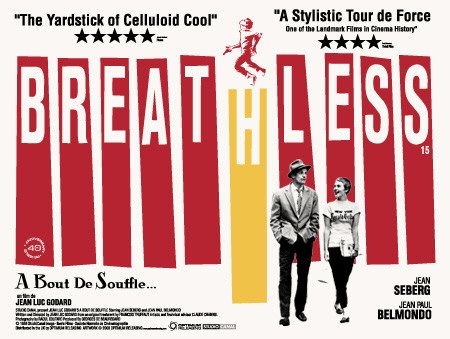 The film noir Breathless (1960) (or À bout de souffle) was directed by Jean-Luc Godard and starred Jean Seberg and Jean-Paul Belmondo. Much like Godard’s Vivre Sa Vie (1962), Breathless is considered a conspicuous work of the “french new wave”. I regret that I know very little about film history in general, but it pleases me to say that this piece adheres handsomely to many of my noir definition vertices.

Summertime in Paris. The newsprint culture wrapped in a heatwave and the intrigue of a fugitive at large.

Michel is the ultimate con-man. The swindler takes whatever he can get away with and his selfish hunger coupled with blind disregard is as endearing as it is infuriating. He’s perpetually inflated by his own arrogance and rewarded for his craft. He’s stuck in a nose dive that everyone can see but himself. 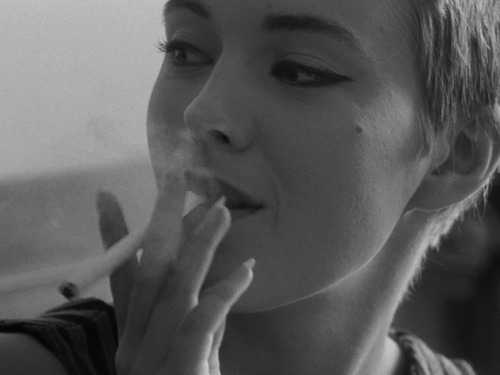 Patricia is an intelligent and beautiful American girl working for the Paris division of The New York Herald Tribune. She has a subtle history with Michel, and she is the only thing keeping him in a city that desires his demise. She truly is a wonderful femme fatale, for she is the ultimate cause of his untimely end.

“What is your greatest ambition in life?”
“To become immortal. And then die.”

The misogyny is this film noir primarily revolves around Patricia’s oblivity. She always suspects that Michel is not what he appears, but she doesn’t catch immediately. The final scene paints her as a dodo bird, beautiful but stupid. Additionally, we want to believe that Michel views her as more than a sexual conquest, but this feels a stretch at times.

“Two things matter in life. For men, it’s women, and for women, money.” 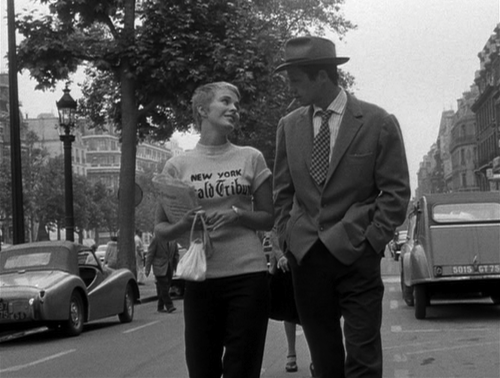 Michel appears to feel no guilt for the crimes that he has committed, especially the murder. He is completely consumed by two motivations; Escape, and Patricia. It seems he believes redemption lies in her trust. If he can acquire it (and by default, her), then he can feel absolved as an exile.

The smoking in this film is the seductive punctuation to every line.

Michel is a very masculine individual and in all aspects of his life he’s a conqueror, until Patricia. As soon as he allows himself to be emasculated by her, he meets his end. Classic film noir.

“I always fall for girls who aren’t cut out for me.”

I absolutely adored this film. Breathless is a beautifully wrought film noir.