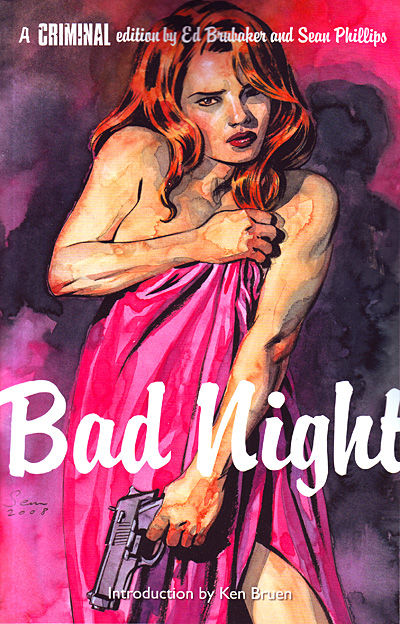 Criminal: Bad Night by Ed Brubaker and Sean Phillips is the best volume in the series. This arc is the one that sent me over the edge from “series-admirer” to “series fanboy.” Phillips’ art is moody and personal, as dreary and sleep deprived as the insomniac protagonist, and Brubaker’s pulp style never disappoints. The book is riddled with plot twists and heinous discoveries, and is a first-hand witness of a man’s plummet into madness. 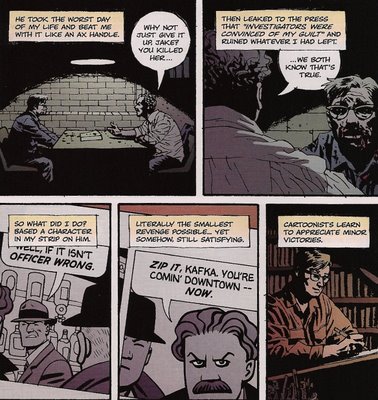 Here’s an overview of the plot:

Jacob Kurtz is a nearly crippled widower with a past proclivity for counterfeiting. He spends his days writing a serial-style comic called “Frank Kafka” for the local paper and his nights trying fruitlessly to sleep. He’s completely caged by his loneliness and unwavering routine. His health problems are largely a result of an undeserved beating he received when it was believed that he murdered his wife, in reality she had been the victim of an unfortunate car accident that left her body hidden for months. Now, Jacob is a recluse who’s seeking nothing by privacy and four hours of sleep a day; if he can get it. So absorbed in his own timeless drudgery, he’s completely  unprepared for the one Bad Night. 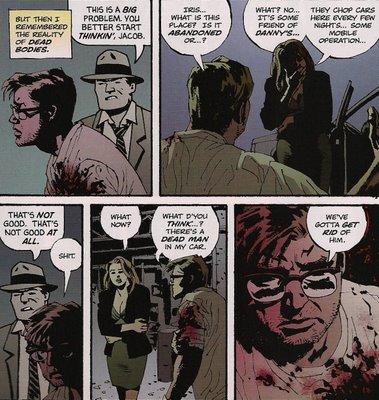 He visits a local diner nearly every night, takes his normal spot at the bar and checks the day’s paper for his latest “Kafka” installment. Behind him in a booth of their own, a man shouts obscenities at a woman and perches on the edge of violence. Tensions inevitably flare, but are quickly defused when the couple are expelled from the restaurant. Jacob puts this strange encounter from his mind, but is quickly reminded when he drives past the woman from the diner walking home in the rain. The inciting incident for the whole noir comic is when he decides to offer her a ride. 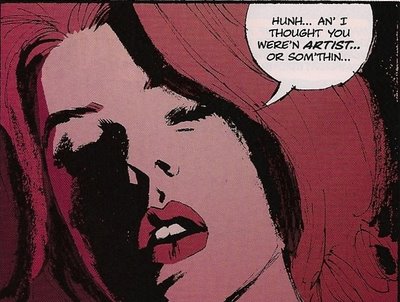 I could do a whole noir definition run-down on this graphic novel, but it’s the fourth book in the series and I’ve already done it for the three previous. Ed Brubaker who is a master noir story-teller, he doesn’t need me to point out why. It’s noir, okay? Trust me. Better yet, trust Brubaker and Phillips. Additionally, I don’t want to ruin the plot of this one. It’s one of those books you wish you could go back and experience again for the first time. Once you know the end, you see it from the beginning. 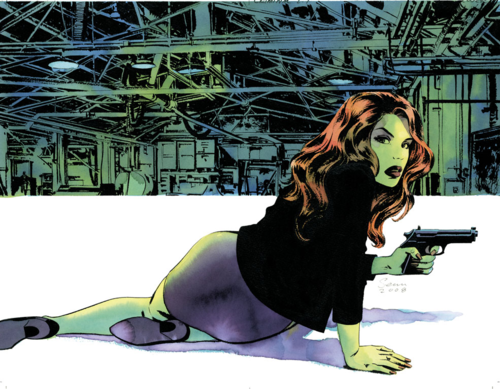 Bad Night is one of the greatest written examples of a femme fatale in the genre. She’s text-book perfection as far as plot goes, and Jacob’s interactions with her couldn’t be better. This book is cerebral noir, most of the action happens between the ears, and it’s that much more frightening because we’ve been down those dark corridors in our own psyche. The only difference is, Jacob believes in what he finds there, and swallows wholesale the rationalizations and imagined conspiracies. But we never do that, we’re smarter than that…aren’t we?

Please read Criminal: Bad Night. If you only read one noir comic ever, please read this one.