I attended the 8:20 pm showing of Looper (2012) last night with friends, and after hearing so many positive remarks about the film, I was filled with lusty anticipation. Near the 20 minute mark I was sold, already plotting how I would swing the cash to get it on blu-ray release day. Looper is an instant cross-genre classic– finely weaving my beloved neo-noir/crime movie genre with science fiction thriller. The story was fresh, the dialogue nearly free of eye-rolling dramatics, and the solid acting carried me breathless past the finish line.

The trailer for the film does it a great disservice, for it makes the story seem more bizarre than needful, fails to highlight each member of the wonderful cast, and doesn’t play to the strong cinematics and cool vibe that permeates the picture. Meaning, when I saw the preview some months ago I thought it looked interesting, but it failed to arrest my attention. I didn’t even know it had such strong noir elements. The only reason I attended Looper at all was due to the flood of positive word-of-mouth reviews; So I’ll add mine to the stack.

In 2044, time travel hasn’t been invented yet. But, in 30 years, when it finally becomes a reality– it’s quickly outlawed because of the messy consequences associated with such an event. Future gangsters, illegally using time travel, send people back to 2044 to be killed and disposed of by ‘Loopers.’ The Loopers are well-compensated for their service, but eventually each Looper knows that the Mob will ‘close their loop’–meaning, they’ll kill their future selves. This results in a big pay day, a discharge from the service of the mob, and 30 years to live on their earnings. When Joe (Joseph Gordon-Levitt) fails to close his loop, he must battle wits with his future self (Bruce Willis) to save his life.

The setting of Looper is a filthy future Kansas– The city is overrun with garbage, ramshackle vehicles, brothels, and vagrants. The farming communities nearby are wholesome snapshots of the past, though frequently threatened by hungry homeless and other unsavory pilgrims from the city. The present frontier of an ever encroaching evil world.

Joe the younger and Joe the elder are completely different characters; Although the same individual, time and a wealth of experiences separate them. Young Joe is a junkie– He’s making a good bit of cash as a Looper, and spending as much of it as he can on drugs, women, and any other pleasure he can purchase. He’s a stoic pessimist with no loyalty for anyone other than himself. Old Joe is filled with regrets– He is completely consumed by the desire to return to his wife in the future, the woman who cleaned him up and saved his live, at any cost. He’s a brutal realist, a violent veteran, and a grateful though irrationally desperate human being. They both monologue beautifully at different points in the film– TOTAL noir.

Emily Blunt as Sara (via heyadamlooney.tumblr.com)

Sara (Emily Blunt) is the femme fatale in Looper. Without dropping too many spoilers, she creates the right amount of tension and desire to conflict Young Joe. She’s at the crux of many important choices in the story, each of them deadly, which is prerequisite for any true femme fatale.

Looper does a fair job portraying female characters as proud and independent while simultaneously making them damsels in distress. So even though the script isn’t blatantly misogynistic, classic themes of the ‘helpless woman’ pepper the tale.

The film is bursting with redemptive themes– Young Joe wanting to close his loop and redeem his failure, Old Joe trying to reconcile the future with the present, Sara haunted by past missteps– Loads of intellectual and spiritual redemption happening in Looper. 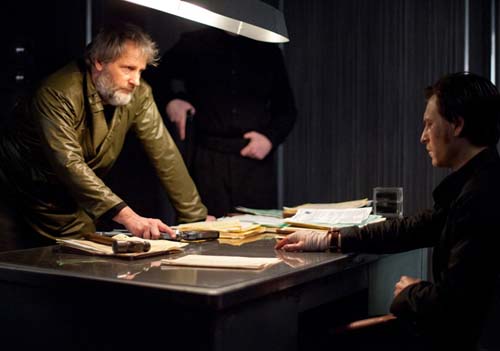 Jeff Daniels as Abe, the Mob Boss (via flix66.com)

7) The Loss of Innocence

The loss of innocence theme was POWERFUL in Looper. The more you learn of each character’s past, the more you hurt for them– the more you endorse their destructive behaviors. Childhood innocence is a recurring theme, and how it must be protected to prevent tragedy in the future. Also, there was a fairly disturbing scene towards the beginning of the film, where a broken loop is enticed to stop running; He hadn’t considered what could happen to him if his past self was captured by the mob…

I was delighted by the homage to film noir in Looper— smoke and cigarette integral throughout. My favorite moment was when a quiet Sara, sitting upon her porch, pretended to pull out a cigarette, light and smoke it. Even though the cigarette was absent from the scene, you could see the implicated themes of addiction, control, and temptation playing across her features.

Can we all just root for Kid Blue (Noah Segan)? The poor guy can’t catch a break. He’s a goon for the mob boss Abe (Jeff Daniels), and it seems like he completely botches every assignment he’s given. By the end of the film, I was actively cheering for him– so do me a favor and pull for Kid Blue when you see Looper.

I can’t wait to own this film on blu-ray– It’s noir elements were executed so beautifully that I kinda hate Rian Johnson (the writer/director) for thinking of it first.