Ashes and Diamonds (1958) is a Polish film noir that I viewed over the weekend. Taking place at the end of WWII, the film is a portrait of a broken and bitter people, desperate for hope in a bleak world. Each character seems to have lost their faith, in God and country. The cinematography is striking; It stood apart from many works of the era because of its use of arresting imagery. Every frame emphasized recurring thematic elements before bothering to capture the action– refreshing creativity to behold (especially when mired in our modern age of rehashed technique and lazy film making).

Directed by Andrzej Wajda, and based on the 1948 novel by Polish writer Jerzy Andrzejewski, Ashes and Diamonds follows a Home Army soldier named Maciek (Zbigniew Cybulski) through a series of life-changing events on May 8th, 1945 (The day Germany officially surrendered). He and his fellow soldier Andrzej (Adam Pawlikowski) had been assigned to assassinate the communist Commissar Szczuka (Wacław Zastrzeżyński), but things do not go as smoothly as planned. After a failed ambush, and a few false-starts, Maciek meets the girl of his dreams and falls in love– and he’s left in crisis: her or the cause?

Ashes and Diamonds lives up to our noir definition with ease:

An unnamed Polish town serves as the setting for the film– yet the most important scenes occur in a small hotel barfront and a bombed out church. Two vastly symbolic backdrops for a people as displaced and discouraged as the Polish.

Maciek is old too young. Constantly peering out from behind dark glasses, as a soldier he developed hyper-sensitivity to sunlight when he participated in the Warsaw Uprising (a period of time where he lived in the sewers). He’s battle scarred and lacks self-control, a lack we witness in terror as he pulls a fatal trigger. Yet, he craves a normal life, a life away from the violence– a life of love and peace.

The hotel’s barmaid, Krystyna (Ewa Krzyżewska), is the femme fatale of Ashes and Diamonds. She’s young and beautiful, but surprisingly bitter; a cold witness of the war’s effect on her. Maciek becomes infatuated with her, and as the hour of his next attempt on the life of  Commissar Szczuka approaches, he begins to glimpse a life that ‘could have been.’ His unquestioned fervor for the cause melts in Krystyna’s embrace, and he’s rattled by the hope she represents. When a character has nothing to lose, his sacrifice is devalued–Maciek becomes a true noir anti-hero when he finally has hope for something he can never obtain.

Little snippets, here and there, of misogyny pepper the film, but I never found any scenario that was blatantly offensive. Commissar Szczuka has a son who was raised by his sister-in-law during the war against his wishes (the Commissar’s wife long dead), and he confronts the woman with his displeasure. Ultimately, I applaud the director because she stands her ground, unflinchingly confident in her role in the child’s life. This show of power from a woman (especially opposite a strong male character) was very forward thinking for the time period. 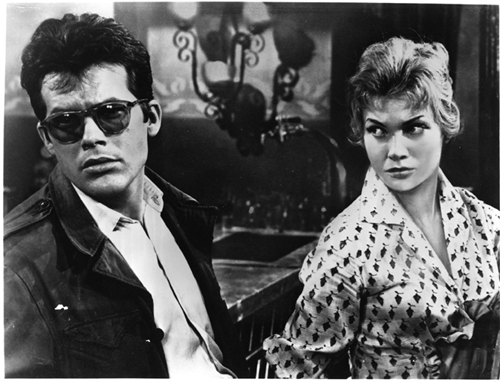 Maciek and Krystyna (via ohnesans.tumblr.com)

The redemption theme is especially potent in this film. Each character has a moment where the audience perceives their desire to be redeemed from the horrors of war. Ashes and Diamonds is not about the redemption of any specific character; it is about the redemption of Poland. Warsaw is mentioned as a ‘beautiful memory’ in the script– (in reference to the near total destruction inflicted by the Nazis) –the Polish survivors are filled with longing for a return to their former happiness.

So often, are you as a blazing torch with flames
of burning rags falling about you flaming,
you know not if flames bring freedom or death.
Consuming all that you must cherish
if ashes only will be left, and want Chaos and tempest
Or will the ashes hold the glory of a starlike diamond
The Morning Star of everlasting triumph.
-Cyprian Norwid

7) The Loss of Innocence

A great scene about half-way through the film occurs between Maciek and Andrzej as they share a quiet moment in the hotel bar. A tray of vodka shots has been poured, and they set a glass aflame for each of their fallen comrades. They’ve already lost their innocence, and they’ll never get it back.

Hungarian or American cigarettes? I was surprised to find more alcohol than smoke in the film– I felt like I was watching Mad Men: Poland.

I know very little about the psyche of war-torn Poland– but the helplessness that they must have felt, especially as men failed to protect that which they held dear is undoubtedly emasculating. Maciek and his cohorts take back their manhood through acts of valor, each moment ready to make the ultimate sacrifice.

For Fallen Friends (via omarsfilmblog.blogspot.com)

Ashes and Diamonds (1958) is lovingly photographed, and would be a prized piece of any collector. As the final moments of the work concluded, I was struck by how bleak, terrible, and excellent this film noir truly is.  You can get it here.