Marxist Literary Criticism isn’t so much concerned with how the proletariat is represented in a particular work, but with how plot, theme, and character are a product of a specific period of history. The Fargo movie from the Coen siblings showed up during the neo-noir resurgence in the early to mid ’90s (on the heels of such classics as Reservoir Dogs (1992) and Pulp Fiction (1994)). And as a piece of neo-noir fiction, it’s wonderfully entertaining though a bit enigmatic; it lacks a femme fatale. Thus my normal structuralist approach disintegrates by my third bullet-point. But, in pondering this missing element (which appeared to be gross error), I discovered that although no ‘fatal woman’ appears in the credits, there was a leading lady after all; money.

For the love of money is the root of all evil: which while some coveted after, they have erred from the faith, and pierced themselves through with many sorrows.
1 Timothy 6:10 KJV

Americans have always had a strange affair with lucre. We worship an ideology of hope called ‘The American Dream’ which states that anyone in this country can be a ‘self-made man’– anyone can become wealthy if they roll up their sleeves and do the work. As beautiful as this ideology may be, it has a slimy underbelly of assumptions that come along with it. We assume that the poor are poor because they’re lazy or stupid, while simultaneously believing the opposite– the rich are rich because they’re intelligent and hard working. Unfortunately, the reasons for wealth and poverty are never so straight forward.

How does this relate to Fargo?

Fargo (1996) challenges the ideology of The American Dream and the love affair that Americans have with money. Jerry Lundegaard (William H. Macy) is a cheery car salesmen who has accrued a great deal of debt. He devises a way to get the money to pay off said debt as well as amass a small fortune of his own. He hires two thugs to kidnap his wife so that he can extort ransom money from his rich father-in-law Wade Gustafson (Harve Presnell) (who would NEVER give him money otherwise) but quickly loses control of events. 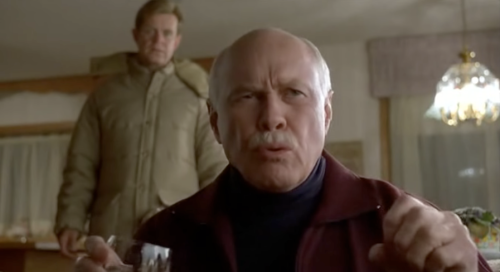 Jerry is a fascinating character because he is equally pitiable and detestable. We sympathize with him because of the pressure his debts have placed on him and the demeaning way his father-in-law treats him, but we hate Jerry because he has put his innocent wife in danger for such selfish reasons. But we mustn’t forget that Jerry presents Wade with two options during the course of the film; the first being a legitimate business deal, and the second being the ransom of his daughter.

We ache for Jerry when Wade and his business associate Stan Grossman (Larry Brandenburg) take Jerry’s investment opportunity away from him, essentially stealing the deal for themselves. Sure, they’ll offer him a ‘finders fee’ but they are cutting him out of all future revenues. In this scene, Jerry is the everyday man, the average American trying to create opportunity for himself– and the existing socioeconomic power structure squashes him. With his only legitimate option defeated, he is forced to work outside the law for a means of acquiring his fortune.

Later, when the ransom money has been counted and bagged, Wade again takes the power out of Jerry’s hands– refusing to allow Jerry to take the money to the kidnappers. Jerry is emasculated by his father-in-law, by the kidnappers, and eventually by the police; as Wade takes the money to the swap, we see Jerry sitting by his front door in his coat and boots, impotent. Wade makes the exchange and is killed in the process, refusing to let go of his money until he ‘sees his daughter.’

Fargo in the Marxist sense appears to be progressive because it rails against the established socioeconomic structure– A structure represented in the film by Wade Gustafson and Stan Grossman because of the monetary might they are able to wield. But, à mon avis, the story is repressive because it reinforces the existing structure by punishing those who attempt to escape it (or to climb within its rungs). The American Dream is the fantasy, the religion of hope that keeps men vying for wealth– and in this film it kills them in the process.

POSTSCRIPT: I neglected to mention one of my favorite scenes where the commodification of Wade’s daughter is most apparent. Jerry tells Wade that the kidnappers want a million bucks for her, and Wade asks if they’ll take $500,000. Unreal.