The film noir anime Rin- Daughters of Mnenosyne is a six episode animated Japanese series that was produced to commemorate the tenth anniversary of the AT-X network (which it originally aired on). I viewed this series some time ago, near the beginning of the summer I think, but am just now getting around to reviewing it. The six episodes  had the unusual effect of producing a duality of feelings/opinions within me; applause and abhorrence. As ever, the Japanese creative team (with lead writer Hiroshi Onogi) effectively push the boundaries of the genre and toy with social ideas and gender roles in such a way as to create controversy. Here is how Rin- Daughters of Mnenosyne measured up to my noir definition:

More digital than seedy, the six episodes of film noir anime play out in Tokyo’s Shinjuku district in the modern/near-future. The setting is forgettable.

Rin Asogi is an immortal female private investigator. She runs a private investigation agency, and her cases range from everyday mundane to insanely bizarre. By placing the traditional male lead in the hands of a very feminine character, the classic complications created by gender roles in the noir genre are torqued in intriguing ways. And then further heaped on top of the pile is the fact that Rin can never die. The ripples caused by this casting choice alone shake the foundation of accepted noir thought.

Many different females fit the femme fatale archetype in Rin- Daughters of Mnenosyne. You would think that because the lead is being played by a female private eye, that a male would logically played the role of homme fatale. Wrong. Rin Asogi is a lesbian, and from what I saw in the series an extremely active one. (The homme fatale role IS represented, but in a more blatant and monstrous way than a traditional femme fatale is. See “angels” below).

possibly the perfect mix between anti-hero and femme fatale? (via theanimenetwork.com)

Further complications are raised because of Rin’s sexual orientation (or I should say the portrayal of her sexual orientation), because it seems that the story is pandering to a male audience. Instead of empowering women, it debases them for the gratification of drooling male viewers. Another facet of the storyline that reeks of misogyny is the unequal duality of males and females in the story. It’s explained that Rin has been granted her immortality because she is in possession of a “time spore.” This spore is what grants her the ability to regenerate any wounds (even when they have resulted in her death) and it yields her youth and beauty for eternity. Contrarily, when a male obtains a “time spore,” he becomes what is known as an “angel”; a savage who surrenders almost instantly to his uncontrollable primal desires. Central to these desires is an irresistible need to feed on and copulate with females who possess time spores. The horrible caveat is that these females find the “angels” completely and utterly sexually desirable; such that they are often eaten in the process of surrendering themselves sexually to their attackers.Yikes. Thus the script is filled with a surprising amount of violence perpetrated against the female characters; more to come in the eroticism section of the noir definition.

one of many violent endings (via blogs.emory.edu)

The fact that Rin Asogi is immortal, and that her dark past seems to be constantly haunting her, very pleasingly utilizes the noir theme of redemption. After only a few episodes it becomes clear that redemption will never be attained by Rin, and we as an audience will never understand the nature of her desired redemption. My only peeve is this: Why is it that every anime is so fraught with flashbacks and confusing plot twists? It’s like a story teller having Attention Deficit Disorder.

I was appalled by the overly stylized and overt attempts to sexualize the series. Bondage, sexual torture, sexual extortion, molestation, and lesbian encounters anchor this film noir anime script in a realm of unreality and disgust. Many scenes were simply designed to raise the hackles or titillate the viewer (or some awkward combination of both). I felt these efforts cheapened the story and thwarted many of the beautiful differences that would have made Rin- Daughters of Mnenosyne a stand-out in the film noir anime genre.

The Loss of Innocence portion of this film noir anime includes several perverse scenes of sexual extortion, torture, and molestation I don’t wish to dwell upon. So I won’t. 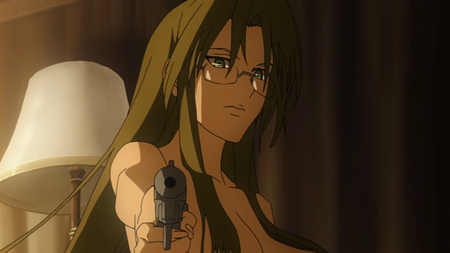 Not any that I can remember (not that it wasn’t there).

I’m certain there was smoking in the show, but I don’t actually remember if it was Rin or not. Either way, it was there.

Ultimately, I can see some of the things that Hiroshi Onogi was driving at, but I felt that his story suffered from poor execution. The author seems to desire an awakening in his audience to the mismatch/inequality of gender roles in modern society. I also believe that he was trying to highlight the horrendous power and consequence of human (especially male) desires. Unfortunately, in this film noir anime, his message is lost in juvenile “fanservice” and pointless sexuality. Close but no cigar.

On the recommendation of one of my very good friends (Brandon D.), I looked up the anime Darker Than Black on Netflix. He told me that as he had watched he felt that there were many noir elements that deserved a closer look. Yesterday I completed four full episodes of the film noir anime, and to be honest it left me with mixed feelings. It was very sci-fi film noir/anime action in genre, with a bit of ne0-noir peppered on top. Here is the groundwork:

Contractors are post-humans with super powers (gravity control, matter disruption, etc.). The only caveat to their power is that they must complete some compulsory action each time they wish to exercise their abilities. These can range from breaking their own fingers, folding every page of every book they touch, singing a certain tune, or eating large amounts of food.

Dolls are psychic mediums or hollow personality-less vessels. They are always depicted as females who lack pupils in their eyes. By submerging one of their body parts in water, they are able to sense with great clarity anywhere else that has an abundance of water. Hence, in the rain they can see every happening in the city simultaneously.

Moratoriums  are neither Dolls nor Contractors. Uncontrolled power courses through them recklessly and endangers the lives of all those around them. After a short period of power expenditure and destruction, Moratoriums lose their abilities and become comatose Dolls. The reason they are so feared is twofold: 1) they have no control over their power, and 2) they don’t have to pay any price to use it like Contractors must.

I absolutely loved the first two episodes of Darker Than Black. They certainly had a large dose of science fiction, but the noir elements were undeniable. Femme fatale is in trouble, an anti-hero loner is her only hope, and feelings of love develop quickly between the two that plunge them into deeper trouble. The most fascinating noir element I felt was the homme fatale factor. The main character uses his charm and confidence to coerce and influence even his enemies. He puts up the front of a trustworthy ally, when inwardly he is a ruthless Contractor who cannot be trusted. Very homme fatale.

By the fourth episode, I was bored. I may watch some more in the future because the idea was intriguing and the art was superb, but I felt that it was grasping at noir without fully gripping it. It couldn’t measure up to our noir definition. You can watch the whole series on Youtube as well as Netflix. (Click here for Darker Than Black videos).