Blacksad holds a variety of emotions for me. The noir comic is saturated with painful plot-lines– the types of stories we are afraid to read but cannot resist. Perhaps this seductive quality is what makes it such potent noir; it refuses to compromise itself or resolve in any sort of ‘happily ever after’ fashion. At first glance, I assumed that Blacksad would be a silly comic, but as I delved into the masterful script (by Diaz Canales) the animal caricatures and bold colors began to fade into bleak reality. I’ve already reviewed the flagship hardcover on noirwhale (you can read it here), so this will be a review of the newly released chapter “A Silent Hell.”

Blacksad: A Silent Hell takes place in the Jazz-fueled south, a setting which isn’t frequented enough by the noir genre. This chapter is easily the most complex, as each page introduces new characters, backgrounds, and plot-lines. Yet again Blacksad is quickly embroiled in long rotten secrets and hedged by liars. In the relatively short book, we’re witness to an incredibly visceral drama– and many of the splash pages are some of the most cinematic I’ve seen in any comic. It begs a more effective medium of expression, a film or a soundtrack– something that could lend a voice to the crooning blues or movement to the debauchery of Mardi Gras. A Silent Hell‘s weakness unfortunately is in its complexity, I found myself re-reading many pages in an attempt to make sense of the quickly spiraling plot. If you can’t read it in one sitting, you may find yourself lost by the final page.

perhaps the most impressive page in comics (via leftmewantingmore.blogspot.com)

We cannot overlook the impressive watercolors within A Silent Hell— just as the plot becomes more complex with each additional layer, the pages are delicate masterpieces that speak countless patient hours sacrificed by Juanjo Guarnido. From the little I understand about the difficulties of working with the watercolor medium, my appreciation for this beautiful book is boundless. The latter-half of the hardcover collection that I own is entirely dedicated to exploring the creation of each page and the tedious concentration and effort such a project demands. We are fortunate to have a master in our midst. 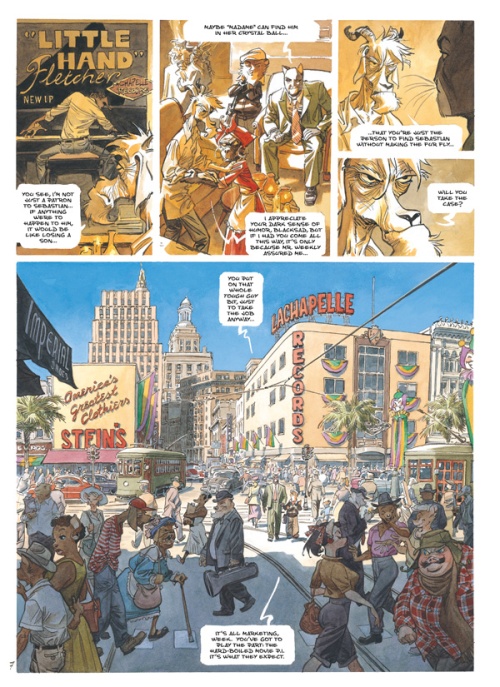 Both Blacksad hardcovers are prized in my personal library, and hold a place of prominence on the shelf– If you were initially turned-off by the anthropomorphic aspects of this international bestseller, please reconsider. You won’t regret sharing in such an unforgettable noir epic.

Blacksad by Juan Diaz Canales and Junjo Guarnido is an incredibly fine piece of noir. I’ll begin by thanking Zach S., without whom I would be completely ignorant of such a wonderful noir comic. Although the creators are Spaniards, Blacksad was initially published in France, and has since seen dozens of international editions and incomparable acclaim worldwide.

The hardcover edition that I own is a gathering of three stories written about the private-eye John Blacksad; “Somewhere Within the Shadows”, “Arctic Nation”, and “Red Soul”. Each of the characters are anthropomorphic, and even when famous individuals from history appear in the story, they do so in animal fashion. Don’t be fooled by the cartoonistic quality of the art, because the story is as gritty and real as any noir lover could desire.

“Rather than animals who act like people, the creators’ approach is predicated on people who resemble animals.”

Junjo Guarnido’s style is deeply emotional, and each panel builds upon the last. I was surprised by how his art took me to my childhood, and I learned that this is largely in part because of his work at Disney.

Here is a brief teaser of each story:

“Somewhere Within the Shadows”

A famous actress and former lover of John Blacksad is found brutally murdered. Although their relationship ended years ago, the wound is fresh and painful, and the event sends the private-eye spiraling into a cold hell that he must embrace to deal lasting justice on her behalf.

Racial tensions boil violently beneath the surface of an idealistic neighborhood, and John Blacksad is tasked with peeling back the veneer. He plumbs the depths of corruption, sexual depravity, and racially charged atrocity, eventually revealing a secret that has been hidden for 20 years.

At the height of the “Red Scare”, John Blacksad finds himself tangled in a web of communist sympathizers and the powers that wish them dead. While the future peace between the world’s superpowers hangs in the balance, John finds a woman and a plot that will make him risk everything.

Here’s how Blacksad stacks against the noir definition:

Quintessential noir genre underworld. Crime scenes, city streets, posh mansions, and ghetto slums. The backgrounds are just as detailed and vibrant as the characters. The setting literally leaps out of the panels.

Somewhere Within the Shadows (via comicsworthreading.com)

John Blacksad is a brooding black cat.  He’s loyal, sensitive, strong, and intelligent, but he’s betrayed by his own code in the end. Sacrificing for the greater good may have seemed like the right decision, but it leaves the reader with the bleakest ending possible. Deliciously noir.

Natalia Willford may seem the natural choice for the femme fatale because she causes so much turmoil for John in “Somwhere Within the Shadows” (she’s the actress/ex-lover that is murdered). But, even though Natalia causes him to kill in cold blood, Alma Mayer seems the better femme fatale (the woman who appears in “Red Soul”). When they meet she is engaged to be married, but she quickly develops an affair with John. Theirs is a tragic love, and the emptiness of lost love pervades the last pages of the noir comic. 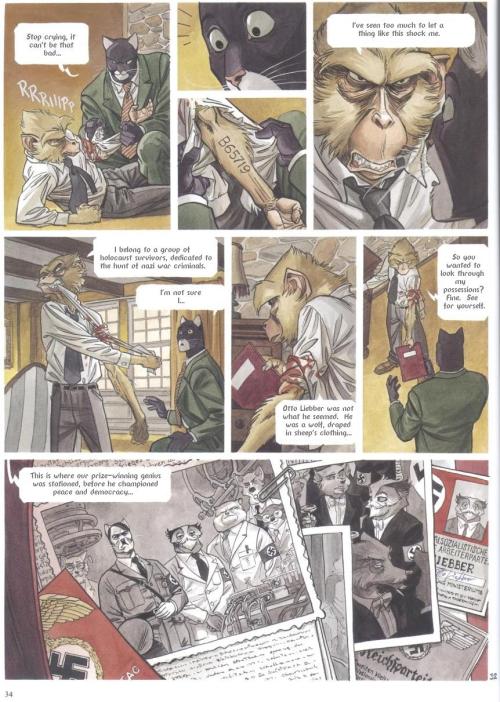 Classic misogyny and old-school masculinity make dirty bedfellows in Blacksad. Spousal abuse, rape, and infidelity all have a part within the story.

Blacksad is constantly propelled by the theme of redemption. The tragedy is that most of the redemption he seeks is not to be had. For instance, the entire first story he is consumed with redeeming the irredeemable: saving Natalia. Because she has already met her end, his only sense of redemption can come through pursuing justice against her killer. His victory is hollow because it reverses nothing.

Sexuality exists throughout Blacksad, but the heaviest dose appears in “Arctic Nation”. The central issues of the plot revolve around infidelity, clandestine affairs, and pedophilia.

There is a moment of lost innocence in each of the three stories, but the most powerful one is felt in “Red Soul”. A man who aided in the creation of the Atomic Bomb (Lieber) revisits his old neighbor only to find that it has become a slum of humanity. He’s confronted by poverty and the ruins of his father’s church, and it overwhelms him. His emotions are expertly captured by Guarnido, and the panel is poignant.

“Arctic Nation” is easily the best of the three stories, and is completely woven together by racism. It’s funny how simple and silly the racial question appears when presented in the anthropomorphic format. Essentially, animals with white fur hate animals with black fur. I absolutely loved the complex layers of plot and social anxiety present in this section. It’s a masterpiece. 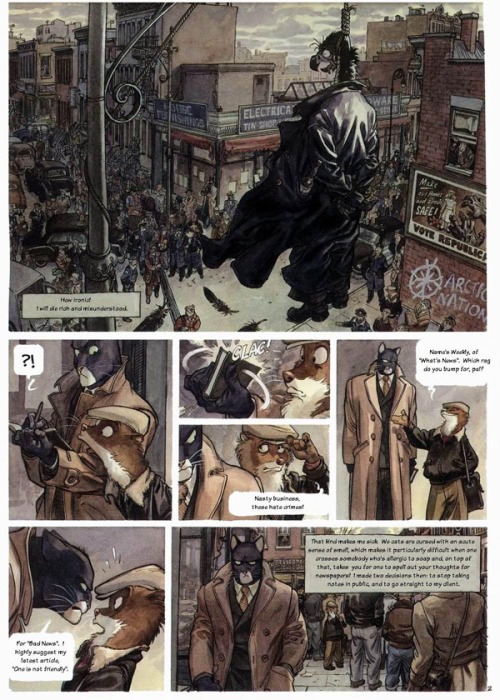 The theme of emasculation is also very constant throughout each of the chapters. Powerful men fear the loss of their power, and it drives them to desperate ends. Often very depraved ends.

Please read Blacksad. It is one of my very favorite noir comics.

Watch out for Blacksad: A Silent Hell coming soon.

Blacksad: A Silent Hell (via brokenfrontier.com)