Max Payne 3: After the Fall

I don’t think I need to restate how much I love the Max Payne series or Sam Lake, the original series author. A month ago, around the same time I was pre-ordering Max Payne 3 for xbox 360, I learned from a Rockstar Games press release that Dan Houser and Sam Lake would be co-writing a free Max Payne digital comic book. The comic is now available. Here is the link:

Rather than do a full noir definition run-down on the comic, I’ll just provide my initial impressions based upon the first issue of this ongoing digital project. All the screen caps are my own, and I hope they illustrate the sections of the noir comic that I found most rewarding.

One of the biggest fears I’ve had about the pending release of the Max Payne 3 video game is the lack of Sam Lake on the development team. The first two games drew their noir potency from his ink, and the thought of a Max Payne story without his involvement seemed wrong. This comic set me at ease. The setting is a twisting corridor of torturous flash-backs, like the revelations of a mad man. Max has been through hell, and in “After the Fall” he’s still there, held captive by demons old and new. As you read his dark monologues, you’ll hear the flat baritone of James McCaffrey and you’ll smile. Nothing important has changed, and that’s exactly the way it should be.

The most intriguing aspect of this first issue is the glimpse we are given into the fear-riddled childhood of the anti-hero. We learn that his abusive father was an alcoholic and the cause of his mother’s early death. The story then takes an even more violent turn and suggests that Max may have been his father’s executioner, a taker of vengeance on behalf of his mother. Understanding his childhood, at least in part, adds new depth to the tragedy of his wife and infant’s deaths. For in that depth we can see his fear of becoming his father; his fear of becoming a harmer of loved ones. 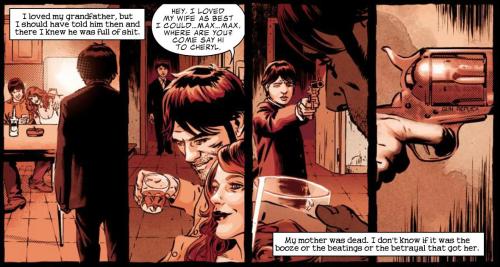 The panels are excellent, and are beautiful examples of noir art. The colors are moody and atmospheric, especially during the flashback scenes. I always value the noir comics that can tell more in a panel then they can with dialogue. Max Payne: After the Fall accomplishes this.

Ultimately, we are privy to a Max that is older and even more deranged and damaged than before. He’s swimming in an ocean of addiction, self pity, and violence. He’s a man with a death wish and a guardian devil over his shoulder, and I can’t wait to see what’s next.

**The noir comic is completely free, what are you waiting for? Go get it:

I was given Max Payne for my seventeenth birthday. At that point, I had never heard of it, and if you were to ask me to define “noir”  I would have had no idea what you were talking about. But, as I dove into the snow-bound grit of Max’s “Noir York City” I became enamored with the potency of the hard-boiled narrative. Truly, the video game noir Max Payne was my first taste of the genre, and I’ve been powerless to resist it since.

Written by Sam Lake, and presented in graphic novel cut-scenes, the story-line of Max Payne is a near perfect example of crime fiction. A brooding undercurrent of anger propels the intense monologues in this revenge/redemption plot. Couple that anger with a ‘nothing to lose’ attitude and we’re given a violent recipe.

Max is a good New York cop, a husband, and a father. With his wife and baby girl tucked safely in a New Jersey suburb, he’s living the American Dream. He’s rudely awakened. Upon returning home from the station on a late afternoon, he discovers signs of forced entry into his home. He yells for his wife…she doesn’t respond. A wicked strip of graffiti mars the inner hallway, a letter ‘V’ split by a syringe. The phone rings, a sinister woman’s voice on the other end:

“Is this the Payne residence?”

“Yes, someone’s broken into my house, they’re still here, you have to-“

“Good. I am afraid I cannot help you.”

He mounts the stairs, and opens fire upon a deranged intruder emerging from the baby’s room. The junkie falls dead. Max cries in agony as he discovers his dead infant in the overturned crib. Gunshots are heard, his wife screams.

“MICHELLE!!” He sprints into her room and slays his wife’s killer. He’s too late, she’s gone. 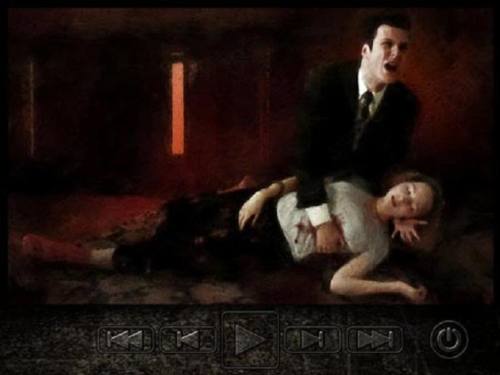 The loss of his wife (via rawcore101.com)

Everything he held dear is destroyed in a moment, a torturous moment on replay.  He learns that the junkies were high on a designer drug called ‘Valkyr’, ‘V’. Hungry for answers, revenge, and redemption, he enters deep cover in the DEA. When his only contact in the department is murdered and his cover blown, he begins a one man war against the Punchinello crime family.

Sound like a decent plot trajectory for a video game? It is. Here is the noir definition run down:

The setting of Max Payne is superb: the New York City underworld during the worst snow storm of the century. A cold day in hell.

I came in from the cold and the dark. Outside, the city was a cruel monster. I’d been slowly working my way from small-time to the big fish, trying to get to the source of the drug.

Max Payne is an excellent anti-hero because he is so simultaneously desperate and tortured. He blames himself for the murders of his loved ones, and his rage is the slow burning fuel that moves the plot forward.

Mona Sax is the femme fatale. She’s a hired gun, and although her role is small in this first game, in the second she truly becomes a central character.

I don’t know about angels, but it’s fear that gives men wings. 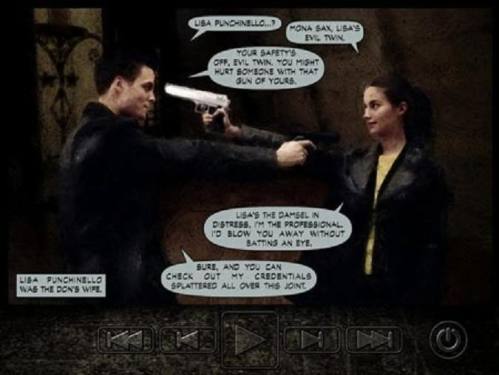 One section of the game takes place in a run-down hotel/whore house. Some objectification of women is present, but never any from Max himself.

The entire plot line revolves around the false redemption that comes from knowing the truth. I call it ‘false’ because knowing doesn’t really change the event. When Max learns the conspiracy laden truth surrounding the deaths of his family, it doesn’t change the fact that they are gone. He can never be truly redeemed.

A little eroticism here and there, but nothing compared to the second game. (Review to come).

I went for the hotel first. It was a sad old thing, with flickering lamps and faded colors, cheap mobster punks and tired-eyed prostitutes. I walked straight in, playing it bogart, like I’d done ahundred times before. The place was run by a couple of murdering mobsters, with shark smiles…

Max’s life is shattered by the tragic events at the onset of the game. The murder of his wife and child scar him in a way that can never be fully understood.

I have tasted the flesh of fallen angels… I’ve tasted the Devil’s green blood. It runs in my veins. I have seen beyond the world of skin, the architecture of blood and bone marrow… Death is coming… She is coming, and Hell follows with her.

The Italian-Americans in the game are portrayed in a very mobster/Hollywood fashion. This racism could be considered offensive.

A certain level of emasculation is inherent in the inability to defend his family. Even though the act was entirely out of his control, the guilt associated with surviving, especially when he could have protected them, is immense.

Max Payne will forever be one of my very favorite video games. The game play is addictive and intuitive, and the bullet-time/shoot-dodge physics are exquisite.  I conquered it again last week, and was once again pleased beyond measure.

Sam Lake’s face was used in this game for Max Payne.

Max Payne’s footsteps are SO loud.

Max Payne 3 will unfortunately NOT be written by Sam Lake. It will be penned by Dan Houser.

Dan Houser and Sam Lake are releasing a free Max Payne digital comic in the next few weeks… I’ll let you know when it’s out.