Overtly-stylized film noir fetish satisfaction rushed over me in shuddering waves as I viewed Sin City last week. I could not have been more overjoyed and overwhelmed by the intensity of the film coupled with its adherence to the graphic novel story-lines. It benefited immensely from its unwavering dedication to accurately following the comic (which is rare in a film version of any comic book). Of course, this accuracy is obviously a direct byproduct of the author/creator Frank Miller’s personal involvement and direction.  Add Robert Rodriguez and a dash of Tarantino to the mix and you have one hell of a film noir flick. Once again I fall victim to Quinton Tarantino’s seductive direction, I’ve got problems. Before I lose myself in lengthy comparative analyses of noir definition, let me thank Stephen P. for loaning me the film (and sticking around to watch it).

Frank Miller’s invented playground of devilish behavior, Sin City is indeed a “wretched hive of scum and villainy.” Grit, blood, sweat, tears, and piss stain the monochrome streets and characters who walk them. Often it feels as if the city itself is a living beast rapt in the taut anticipation of cruel violence. The seedy underworld of this film noir sets the standard for the genre.

The anti-heroes of Sin City are incredible. They ride that perfect balance between horridly flawed and perfectly lovable. Dwight (Clive Owen), Hartigan (Bruce Willis), and Marv (Mickey Rourke) fit this character archetype with ease. Each man battles his own demons, for Dwight: his addictions, Hartigan: his heart condition, and Marv: his madness. All I can say is holy shiz Mickey Rourke, who wins immeasurable applause for this deft performance. Each of these anti-heroes, despite their disparities, won me over easily.

Sin City is loaded with femme fatale archetypes; the seductress (Goldie/Wendy, played by Jaime King), the snitch (Becky, played by Alexis Bledel), the deadly (Gail and Miho, played by Rosario Dawson and Devon Aoki), the law (Lucille, played by Carla Gugino), and the victim (Nancy and Shellie, played by Jessica Alba and Brittany Murphy). Each woman executes her role perfectly, and showcases Frank Miller’s astounding understanding of film noir themes and character types. The most important femme fatale in the story is the exotic dancer Nancy. Just as in the comic book, she lingers in the background of every chapter, her seductive lasso tying Sin City in knots. 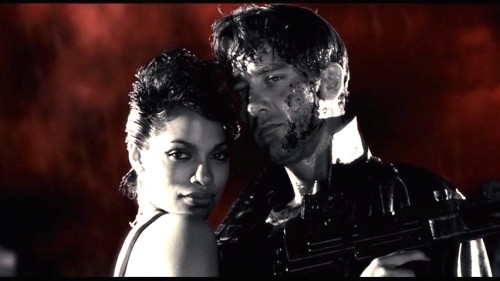 Gail and Dwight via jestersreviews.com 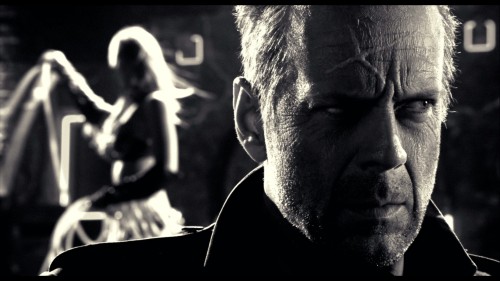 Nancy and Hartigan via filmdogsonline.com 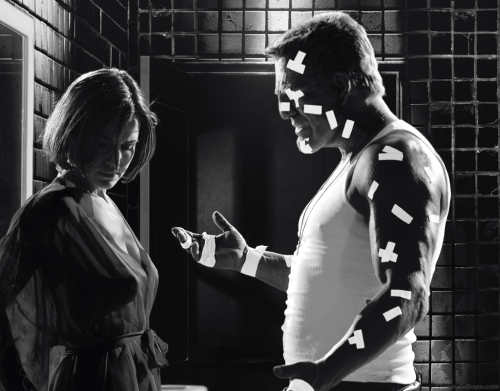 Lucille and Marv via thereviewbin.com

One aspect of the plot that was wrought by old-school noir misogyny occurred when the women in “Old Town” needed Dwight to save them. Some would argue that the women of “Old Town” are a great symbol of empowered femininity, but if examined closely you’ll see that it is not as empowering as initially perceived. First, they dress like prostitutes (which is pandering to a man’s desires). Second, as soon as they accidently kill a cop, they need Dwight (a man) to save them. Finally, they’re entire way of life is male defined. They were allowed to grow powerful in “Old Town” by the mob men and cops who condoned the event. Not nearly as female-forward as many would think.

Every single plot-line revolves around the noir theme of redemption; Dwight must redeem “Old Town,” Hartigan must save Nancy from the Yellow Bastard and redeem the broken legal system in Sin City, and Marv must take vengeance on Goldie’s killer. Redemption as a story motivator always works (and it works WELL in this film noir).

Loss of innocence as a theme definitely plays a role in Sin City. Nancy is almost molested as a little girl by the Yellow Bastard (Nick Stahl), and it’s revealed that he has raped and killed hundreds of young girls. Also, Kevin (Elijah Wood), plays a psychopathic killer who eats the women he kills and mounts their heads on his wall. Coincidentally, he’s also an avid reader of the Holy Bible. How’s that for a loss of innocence? 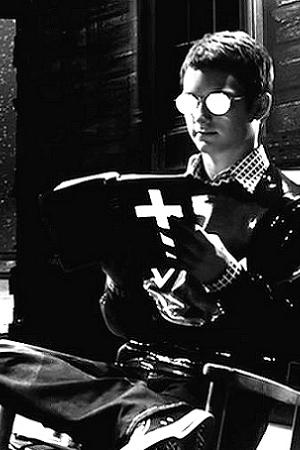 Sin City is buoyed up by some of the most riveting portrayals of eroticism I have ever seen. The nudity may appear wanton, but the passion evoked by the Marv and Goldie sex scene, and the dancing of the singularly clothed Nancy, ignite the pulse of this entire film noir. Those with more modest sensibilities should avoid Sin City; Even though nudity is very openly displayed, there are never any genitals shown(unless you count Hartigan tearing an individuals manhood off in a grotesque clump).

Gail (Rosario Dawson) is basically the “madam” of “Old Town,” and she rules it with an iron fist (or a sharpened stilleto). Also, Manute (Michael Clark Duncan) shows up as muscle for the mob. Race is never brought up as far as I can remember.

The opening scene and the closing scene are both centered on a cigarette. It’s as if Sin City offers you a smoke before and after it passionately makes love to you. Breathtaking film noir. Pick it up now on blu-ray or dvd at Amazon.com.

PostScript: Rumor has it that the script for Sin City 2 has just been completed. I’m drooling with anticipation.